Chaim Surkis was arrested Aug. 28, 2012, by Ramapo police after he stole a garbage truck and struck this empty school bus on Route 45 in New Square. Surkis, 23, of New Square, has been charged with several crimes, including grand larceny. / Photo provided by Hillcrest Fire Department 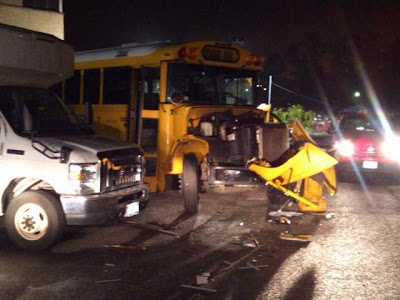 
Chaim Surkis was arrested shortly after 2:30 a.m. Tuesday after police received a report that the garbage truck struck the bus, which was parked in front of 766 N. Main St. (Route 45) in New Square.

While police were at the scene, they said they received another report that the truck was stuck on the lawn of 44 Sandy Brook Drive in neighboring New Hempstead, where Surkis was taken into custody. Police said in a press release he tried to kick out the window of the police cruiser.

Surkis also had an outstanding warrant in Ramapo and was arrested on that.

He is currently awaiting arraignment at the Ramapo police headquarters.

More than 100 pounds of absorbent material was used to collect the fluid that was seeping out of a 50-gallon storage tank in front of the house, he said.

Last December, Surkis’ younger brother, 17-year-old Pinches, was arrested by Ramapo police, accused of robbing two women and trying to sexually abuse one of them. Both of the women were Hispanic and worked as house cleaners.


Pinches Surkis drove a woman to Wesley Hills Park on Willow Tree Road on Nov. 10 and tried to have her perform oral sex, police said. When she refused, he forcibly took her pocketbook, stealing her cellphone. She left the car, and he drove off.

On Dec. 20, Surkis picked up a 32-year-old woman walking on Maple Avenue near Monsey Boulevard, police said. As he drove her around, he solicited sex from her and when she refused, he grabbed her pocketbook, police said. She was able to get out of the car on Hempstead Road at Brick Church Road.

By Steve Lieberman  www.lohud.com
Posted by joe levin at 11:52 AM