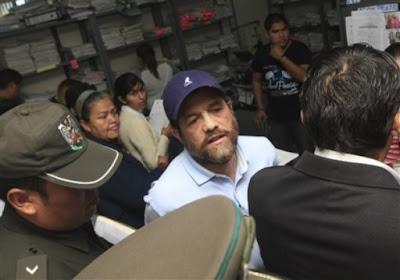 La Paz, Boliva - A Bolivian court denied bail this morning to Jacob Ostreicher, a Borough Park, Brooklyn resident who has been incarcerated without formal charges for more than a year.

The bail hearing lasted nine grueling hours and was spread over two days while Jacob’s mother, a Holocaust survivor, sat through the entire process in the Bolivian courtroom along with her daughter, Jacob’s sister, both weeping uncontrollably.


Assemblyman Dov Hikind (D-Brooklyn), who continues to advocate for Ostreicher, promised to re-double his efforts to set Jaob Ostreicher free.

“It’s inhumane the way Jacob has been treated,” said Assemblyman Hikind. “His human rights have been continually denied, his health is failing, and his family is suffering from his absence and mistreatment.

We have to continue to bring attention to this travesty of justice. We have to demonstrate that Jacob Ostreicher’s life and freedom matter.”

The Assemblyman is organizing thousands of synagogues into action on behalf of Jacob Ostreicher this Shabbos, September 1st (14 Elul), Shabbos Ki Teitzei.

Hundreds of thousands of Jews across America are expected to join in prayer and follow-up with calls and letters to elected officials.

The National Council of Young Israel, The Orthodox Union (OU) and The Rabbinical Alliance of America have all agreed to publicize Shabbos Ki Teitzei for Jacob Ostreicher to their rabbis, congregations and affiliates.

Rabbis across America will be speaking about Ostreicher in their Sabbath addresses and leading special prayers on his behalf. Following the Sabbath, congregational membership will be encouraged to urge their Congressman to adopt Ostreicher’s cause.

“I believe Jacob Ostreicher is fully innocent of all wrong doings,” said Assemblyman Hikind. “Numerous media reports from WABC’s ‘Nightline’ to The Wall Street Journal concur that Jacob is being used as a political football; his family, needlessly traumatized by this on-going nightmare.


And now, as feared, Jacob’s very life may be in danger. I am proud that Jews from across the country and all stripes of orthodoxy will be demonstrating their complete solidarity in this urgent matter. We cannot rest while Jacob is imprisoned.”
Posted by joe levin at 8:01 AM