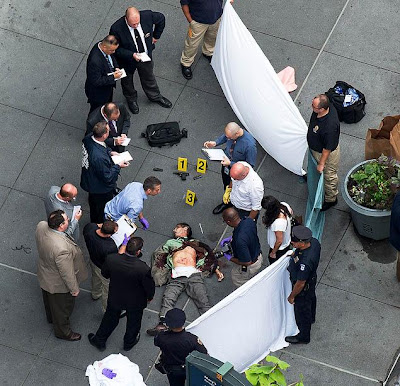 Six of the nine wounded bystanders in the wild Empire State Building shooting were struck by bullet fragments as cops fired 16 shots at a cold-blooded killer in a grey suit.


Three other victims were hit by bullets Friday morning when two officers opened fire on Jeffrey Johnson after the murderer pointed his .45-caliber handgun at them, NYPD Commissioner Raymond Kelly said Saturday.

Johnson, wearing a suit and tie, never fired a shot as the officers approached him shortly after 9 a.m. outside the 102-story tourist attraction, Kelly said.


There was no indication that the gun jammed, Kelly said. There was still one bullet in Johnson’s weapon and extra ammunition in his briefcase.

Two minutes before his death, Johnson pumped five shots into ex-coworker Steve Ercolino just a few steps from the W. 33rd St. business where they had both once worked.


Ercolino was still vice president of sales at Hazan Imports, while Johnson was fired from the company last year. The duo had a long-standing feud, with Johnson — a designer with Hazan — blaming Ercolino for the failure of his T-shirt line.

Johnson, 53, a loner who lived on the Upper East Side, served as a U.S. Coast Guard petty officer second-class during the 1970s, Kelly told reporters in Harlem.

The killer later lived in Sarasota, Fla., from 1983-1992, and bought the murder weapon there. He was struck seven times as horrified tourists and pedestrians ducked and ran outside the skyscraper’s Fifth Ave. entrance.

According to Kelly, two of the wounded civilians remained in Bellevue Medical Center while a third was at New York Presbyterian Hospital.

All three were listed Saturday in stable condition, the commissioner said.

The fatal shooting of Johnson will go before a Manhattan grand jury, although the NYPD already declared the two officers had no choice to shoot the suspect given the circumstances.