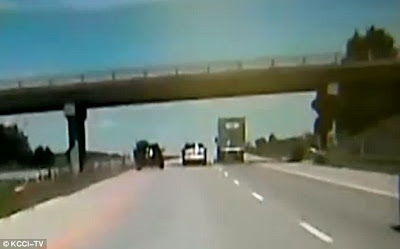 
An Iowa mom helplessly watched as the speedometer on her Kia Sorento surged forward due to a stuck accelerator, and she was left to hold on for dear life.

The mechanical malfunction on Sunday sent Lauri Ulvestad on a fast and furious, 59 mile journey down a Missouri highway in 35 minutes.

The driver somehow managed to maneuver her unstoppable SUV by weaving in and out of traffic, swerving to avoid cars and barreling through a construction zone, in footage captured by state troopers.

Luckily, no injuries resulted from the fast-moving ride north on Int


'I didn't have any doubt about. I really thought I was going to die... and no matter what I did, I couldn't slow it down.'

Though her foot was not even on the accelerator, the rapid moving car continued on and the brakes had no power to bring the vehicle to a halt.

The freakish malfunction occurred when Ulvestad was returning to her home in Ames, Iowa after a weekend with friends in Kansas City, Missouri.

After she stopped for gas and returned to the road, near Bethanny, Missouri, she noticed her car speeding up.

And then the out-of-control Sorento took off.

Ulvestad was able to call 911 and state troopers with blaring sirens came to her aid to move traffic out of the way.

A 911 operator stayed on the phone with her during the petrifying ordeal and passed on advice on how to get the vehicle stopped.

But despite their best efforts, after a half hour nothing worked.

'I had a little angel that said, 'Don't drive faster than I can fly,'' Ulvestad told the local news station, choking up just thinking about those harrowing 30-minutes behind the wheel.


'And I think that's what helped me.'

Finally, the troopers suggested she try and lift up the accelerator and push on the brake at the same time.

'I did that, and it slammed me from 119 mph to like nothing. It slowed down enough that I jumped out, and [the car] kept going and then the officers went and tracked it down and unhooked the battery,' she said.


Footage shows Ulvestad jumping out of her vehicle and falling into the arms of an officer, overwhelmed with relief and emotion.