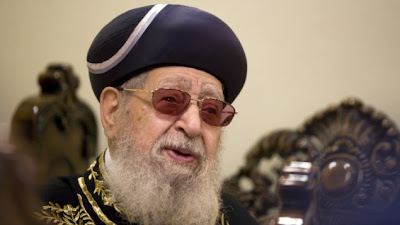 A special request asking God to destroy Israel’s enemies in Iran and their Hezbollah proxy in Lebanon should be included next month in the prayers for Rosh Hashanah, the Jewish New Year, Shas spiritual leader Rabbi Ovadia Yosef said on Saturday night.


“When we say the blessing over the dates at our Rosh Hashanah meal this year,” said the rabbi in his weekly address “and we ask God to ‘bring an end to our enemies,’ we should be thinking about Iran, those evil ones who threaten Israel. May the Lord destroy them.”

Jewish New Year begins this year on the evening of Sunday, September 16.

Each blessing contains a play on words to express a hope for the coming year.


The blessing over the date, tamar in Hebrew, is that the Lord “finish off”, yitamu, the Israelites’ foes.


Last week, days after he was briefed on the Iranian nuclear program by Netanyahu’s National Security Advisor Yaakov Amidror, Yosef said that the Iranian threat could result in death and destruction for the Jewish state, and appealed to God to thwart the Islamic regime’s plans.

“Heaven forbid, they [the Iranians] could bring upon us death and destruction. May God thwart their plans,” the rabbi said in an address.

Amidror was dispatched by Netanyahu to visit Yosef in order to win over the 92-year-old rabbi’s support — and thus the votes of Shas ministers in the government — for a possible Israeli attack on Iran’s nuclear sites, the Kikar Shabbat Hebrew news site reported.

The report quoted Yosef as saying in his sermon, “We beg of Him [God] not to allow those evil people’s plot [to come to fruition]… to thwart their plan and ruin their thoughts, and do to them as they plan to do to us.

Yosef called upon Jews to say slichot – prayers traditionally recited in the month leading up to Yom Kippur, the most solemn day in the Jewish calendar.

Amidror was accompanied to Yosef’s home by Interior Minister and Shas political head Eli Yishai, a senior member of cabinet who has been said, in some reports, to oppose an Israeli strike on Iran.

Iran claims its nuclear program is for peaceful purposes. Israel believes that the program is military in nature and Netanyahu reportedly fears that Iran will soon cross a threshold after which it will be nearly impossible to stop the Islamic Republic from developing nuclear weapons.
Posted by joe levin at 8:58 PM