A Police officer and members of the Ozar Hatorah Jewish school are leaving the area, in Toulouse, France, 19 March 2012, after a man opened fire in front of the school and killed a 30-years old teacher and three children aged 6, 3 and 10. Two others were wounded 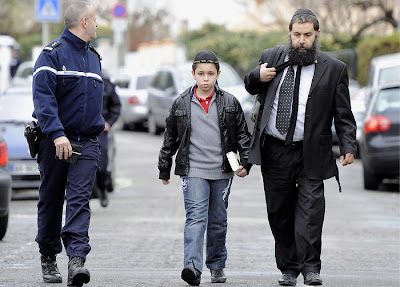 The papers showed he had made more than 1,800 calls to over 180 contacts in 20 different countries, Le Monde said.


Merah had also made several trips to the Middle East and Afghanistan.

Merah, 24, killed three soldiers and four Jewish people in March before being shot dead by police.


The BBC's Christian Fraser in Paris says the papers obtained by Le Monde cast light on a young man who was much more than an angry petty criminal that had "radicalised himself" - as suggested by the DCRI earlier in the investigation.


Between September 2010 and February 2011 the former garage mechanic made hundreds of calls to countries including Egypt, Morocco, Kenya, Kazhakstan, Saudi Arabia, Bhutan and the UK.

Merah had become known to the intelligence services as early as 2009, after they had been following his sister, Souad, and his brother, Abdelkhadar, who are now both in police custody.

Abel Chennouf was one of Merah's victims The papers show that intelligence services recorded a trip to a Salafist, or ultraconservative Sunni Islamist, school of obedience in Egypt.

In February 2011, German officials alerted French colleagues that Merah had travelled from Cairo, via Frankfurt, to Toulouse.

It was only in March 2011, after a long trip to Afghanistan, that Merah was placed under tighter surveillance.

One official quoted in the papers said Merah changed SIM cards, registered under his mother's name, frequently, and suggested the family was trying to protect him.

Merah, who himself claimed to have al-Qaeda affiliation, was also reported to have contacted one known Salafist in Toulouse and two others who recently left for Mauritania.

Merah was shot dead on 22 March after a huge manhunt culminated in a 32-hour stand-off with police at an apartment in Toulouse.

The Jewish victims included three children murdered at a school.

Merah's rampage, from 11 to 19 March, terrorised the region.