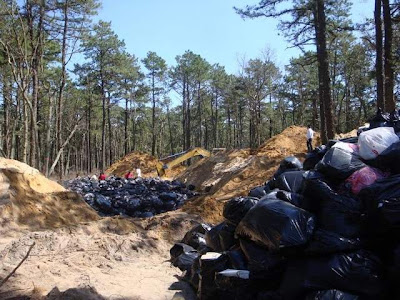 LAKEWOOD — When a large front-end loader started digging at a site off Vermont Avenue on Friday, residents were hopeful that a resolution had been reached over the illegal landfill there.


But state Department of Environmental Protection officials were unable to confirm Monday whether work had begun at the site or at a similar landfill on Frank Applegate Road in Jackson.

More so, Rabbi Chaim Abadi, the Lakewood resident responsible for burying the illegal materials, said he is still in the process of turning the illegal dump site into a cemetery for the buried Jewish texts and clothing.

Abadi’s application for a cemetery was scheduled to be discussed Monday night at Lakewood’s Zoning Board meeting, according to the group’s agenda.


For two years, Abadi of Miller Road and the DEP have battled over the dump site. The DEP has ordered the rabbi to remove the buried religious items because the agency contends it could contaminate nearby township drinking wells.

Thousands of bags are buried at the two sites in Lakewood and Jackson.

Abadi was later ordered by Ocean County Superior Court Judge Craig L. Wellerson to relocate them to an appropriate dump site. The rabbi was given 30 days, as of July 27, to remove the materials from the Vermont Avenue site or pay $1,000 for each day the religious items remain buried there.

The buried articles are known as shaimos, an Orthodox Jewish ritual in which religious items are not thrown away but must be laid to rest in a proper burial under a rabbi's blessing. Abadi provided the shaimos service, accepting the sacred articles such as texts and religious garments, but he buried the articles in places not suited for dumping.

More so, some nearby residents became suspicious of the activity and discovered the buried materials also included mattresses and broken cabinets, among other items, said resident Larry Simons.

Simons said he and others photographed the materials and contacted authorities.

Abadi’s cemetery application is mentioned in a letter to the township from Wellerson, stating the permit request is in defiance of the judge’s court order to clear the site and move the materials to an appropriate site.

On July 11, the DEP also sent a letter to the township Zoning Board, advising that the property that Abadi wishes to deem a cemetery is the subject of a court order.