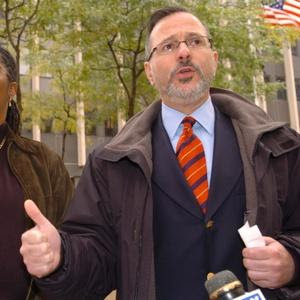 Welcome to Brooklyn Civil Court, Room 706, where “justice” is dispensed by a hack politician-turned-judge without recourse or reference to actual law.


Welcome, that is, to the courtroom of Judge Noach Dear.

Dear hears more than 100 cases a day involving credit-card deadbeats — but he’s decided that 90 percent of them are faulty, so he’s been dismissing nearly all of them and wiping out millions in credit-card debt.

As The Post reported Sunday, plaintiffs can’t get a fair hearing in Dear’s court even when debtors admit they owe many thousands of dollars on their cards.

It’s so bad that American Express asked Dear to recuse himself from its cases, alleging that he’s lost objectivity and shows deep “prejudice [and] impropriety” on the bench.

Dear has compared the credit-card industry’s attempts to collect debts to robo-signing — the process whereby some mortgage-servicing companies filed foreclosure documents without reviewing them first.

But the creditors here do have witnesses with knowledge of the cases. Dear just doesn’t care, and accused one AmEx employee of “robo-testimony.”

Which is really something.


Dear is ignoring evidence and tossing cases — doing real injustice — without even a genuflection to the facts.

Which is worse than robo-signing.

Indeed, the fact that he’s a state judge at all is the stuff of nightmares.

Last month he was booted from Brooklyn Criminal Court after placing an impossible burden on the NYPD: He ruled that before cops can issue summonses for violations of open-container laws, the NYPD had to perform lab tests proving that the beverages were alcoholic.

That was nuts, and would’ve denied the NYPD a key crime-fighting tool that cops use to promote quality of life in the city.

And it was too much even for New York’s notoriously left-wing judicial system.

Dear is unfit to sit in a courtroom.

Lippman needs to shut off the flow of cases for Dear to adjudicate. Let him stew in his chambers for the rest of his term.

http://privateinvesigations.blogspot.com/2012/08/judge-noach-dear-wipes-out-millions-in.html
Posted by joe levin at 8:31 AM