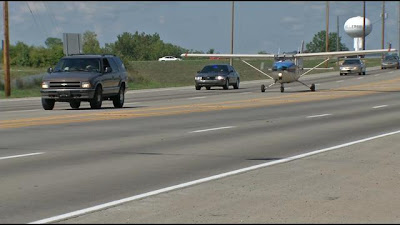 LOUISVILLE, Ky. - - Think about if you're driving down the road and all of the sudden a plane decides it's going to use your lane as a runway.


That was the story Saturday near Sellersburg.

Motorist David Via said “I was headed this way (points) and outta nowhere I just looked up and there’s a plane coming at me. So I tried to veer over to the right as much as I could. He landed, kinda bounced around a little bit, and then the next thing I know the wing clips my truck and goes right over top of my car. It was the wildest thing I've ever seen. I can't believe it.”

A single engine Cessna had to make an emergency landing on SR 60 at about 10 a.m. because the plane ran out of gas.

Eyewitnesses say several cars had to move off the road to avoid being hit by the plane.


One driver that couldn't move in time was David Via.

His red truck now has marks on the roof to show where the plane scrapped across it.

Cpl. Nick Mobley with the Clark County Sheriff's Office said “There were no injuries. We were very lucky that we sustained no injuries, especially at the time due to the traffic volume at the time on SR 60.”


The plane landed about a mile and a half from the Clark County Airport.

The pilot and authorities went to get gas and after it was refueled police officers from Sellersburg and Indiana State Police were able to escort the plane down the highway and back into the airport safely.