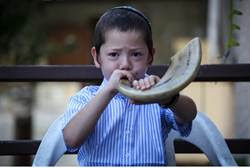 Little Moshe Holtzberg miraculously survived the Muslim terror attack on Mumbai’s Chabad Center four years ago. He already has begun Grade One, and 2 million other children joined him on Monday, the first day of the school year.


Prime Minister Binyamin Netanyahu spoke with Moshe, whose parents, Rabbi Gavriel and Rivka Holtzberg were murdered in the attack while their nanny rushed outside with “Little Moshe” in what became a story that was heard around the world. She eventually joined him in Israel, where he is being raised by his grandparents.

The Prime Minister wished Moshe well and said that the prayers of the entire Jewish people are with him.

The school year began on an unusual note – for the first time in years, there were not even any serious threats of teachers’ strikes. The lack of work sanctions was a cause for a small celebration for the Prime Minister, who said it was “good news.”

This year’s school season starts with a new calendar year, beginning the last week of August instead of September 1, and the extra days will be "returned" to teachers and students by an extension of days off during holiday periods.

It also cuts short the long summer vacation, which is often a major headache for parents, particularly after August 8 when pre-nursery schools shut down.
Posted by joe levin at 11:13 AM