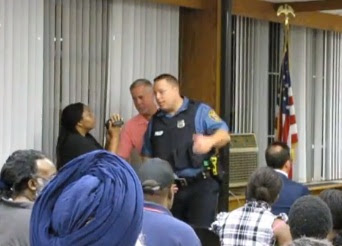 SPRING VALLEY — An East Ramapo school board meeting broke up early, delaying time-sensitive votes — including one related to the federal lawsuit filed against the board — because of a dispute over a woman’s right to videotape the meeting that nearly led to her arrest.


Board members and about 50 members of the public were listening to a presentation of a recent audit report when board President Daniel Schwartz interrupted in an attempt to enforce a new videotaping policy.

The policy, which Schwartz proposed after being elected board president in July, limits taping of the public meetings to a designated area at the back of the room. The area is marked by signs.

Emilia White of Spring Valley said her camera’s view was unobstructed — and bothered no one — at her vantage point at the far side of the room next to the chairs set out for the public.

“When you’re ready to arrest me, just drag me out,” said White, after refusing Schwartz’s repeated requests for her to move to the back of the room because, he said, her taping from the location was interfering with the meeting.

White and her husband, Steve White, who have a son who graduated from East Ramapo in June, have been active in protesting many school board decisions.

The couple are among almost 200 other parent plaintiffs in a class-action lawsuit filed Aug. 8 that accuses Schwartz and several other school board members, in addition to top school officials and the district’s attorney, of violating education law and students’ constitutional rights in schemes to divert millions of public dollars to support private religious schools since 2008. The suit claims these actions have effectively deprived East Ramapo public school students of a fair education.

The lawsuit is backed by public interest law firm Advocates for Justice.

Tuesday, the meeting came to a halt for nearly an hour as the district’s security director, Tom Carton, and two Ramapo police officers, who had been on standby at the meeting, went back and forth between Schwartz and White trying to facilitate a solution. Rockland County Legislator Toney Earl, D-Hillcrest, also tried to mediate before the board members adjourned to an executive session and left the room.   Ramapo police, including two more officers who were called in as the dispute escalated, said it was unlikely they would make an arrest.
Carton and the police said the district didn’t want to make an arrest. Schwartz declined to comment as he walked into executive session.

Board members reconvened in the meeting room about two hours later, around 11 p.m., and White continued videotaping from within a few feet of the same spot, with no objection from board members.

The board worked its way through several key agenda items: setting the tax rate, voting on budget transfers and staffing changes, and approving emergency replacement of the main air-handling unit at Elmwood Elementary School.

The school board also voted to reject the inclusion of the school district as a plaintiff in the Advocates for Justice lawsuit. According to the resolution, the lawsuit’s backers have “improperly attempted to institute legal proceedings in the school district’s name” without board authorization.

The lawsuit lists as plaintiffs the names of the parents, each with children who are current or former students, along with the “East Ramapo Central School District,” and states that it’s included “as a necessary party since the lawsuit, in part, seeks restitution from defendants to the district.”


According to the resolution, the board gives no authorization for this and does not endorse the claims made by the taxpayer plaintiffs in the lawsuit.


School officials and the district’s lawyer, Albert D’Agostino, have declined to talk about the case other than to say that while the lawsuit has been filed, they have not yet been served.

Advocates for Justice president Arthur Schwartz, who is representing the parents in the lawsuit, said whether the district is listed as a plaintiff or defendant in the case is “fairly inconsequential” to its final outcome.

“We’re suing really on behalf of the district and we want money returned to the district so we’ll fight that out in court,” he said.
By Mareesa Nicosia
www.lohud.com
Posted by joe levin at 3:06 PM