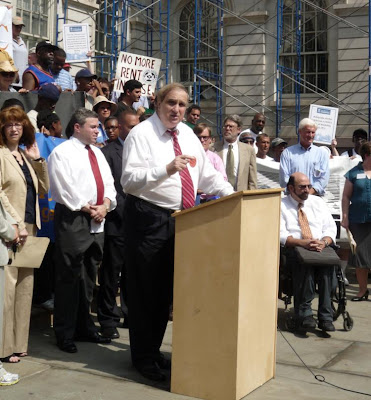 
The powerful Brooklyn Democratic boss created a hostile work environment through “unwelcome verbal and physical conduct” that escalated over time, including one instance where he placed his hand “as far up between [a staffer’s] legs” as he could go, according to an Assembly ethics committee report made public Friday.

Lopez, according to the report, also forced one of the workers to travel with him to Atlantic City, where he attempted to kiss her.

“She struggled to fend you off before you stopped, and that on the drive back from Atlantic City you again put your hand between her legs,” the committee wrote in a letter to Lopez.

Assembly Speaker Sheldon Silver, in a statement, accepted the Committee on Ethics and Guidance’s findings and pledged to carry out its disciplinary recommendations.

"The Assembly has a zero tolerance policy when it comes to sexual harassment and we are committed to ensuring a safe and respectful workplace for all our employees," Assembly Silver (D-Manhattan) said.


Silver removed Lopez from his post as Assembly Housing Committee Chair - costing the lawmaker a $12,5000 stipend - and banned him from holding any other leadership posts.

Lopez was also stripped of his seniority. He’ll be required to take sexual harassment training and will be prohibited from employing interns or anyone under 21.


Lopez’s staff will also be gradually reduced, through attrition, to that of a first time lawmaker.

According to the committee’s report, Lopez made repeated comments about the two staff members’ physical appearance, bodies, attire and private relationships.

Lopez, according to the report, also required the staff members to write down how much they loved their jobs and how much they cared for him. He was critical when they were not effusive enough in their praise.

The sexual harassment charges are the latest in a string of troubles for Lopez, who has faced repeated allegations of corruption and cronyism at the non-profit organization he founded, the Ridgewood Bushwick Senior Citizens Council.

"This was more than just harassment, it's being a predator,” Dadey said. “The taxpayers shouldn't be paying the salary of a sexual predator.”

Lincoln Restler, a Democratic committeeman from Brooklyn also called on Lopez to step down as party chair.

“It is clear we need a full and comprehensive investigation into whether this was a regular pattern of behavior in Vito Lopez's office,” Restler said.