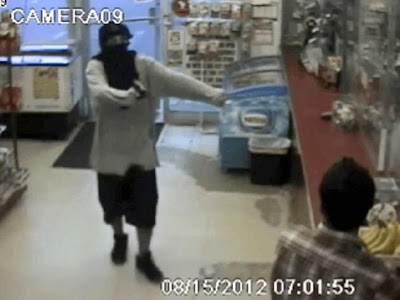 The FBI is offering a $5,000 reward for information that can identify the elusive "ninja robber," police verified.


The frantic man has robbed many convenience stores in South Florida dressed like a ninja.

His disguise consists of a black cloth with a small opening for his eyes.

But his erratic behavior while brandishing a gun is what worries authorities, said North Miami Beach Police Director Thomas Charney.

"It happens too often, the aggression is going up and an innocent person is going to get hurt," Charney told the Daily News. If the ninja robber is cornered, police fear that he may kill someone.

During one theft, a surveillance camera recorded the man pointing his gun directly against a teenaged girl's head while pushing her against the counter with his other hand.

The clerk quickly emptied his register into a plastic bag before the criminal vanished from the scene.

In another instance, the man leaped over the counter and smashed the cash register on the ground to open it. These unpredictable heists have escalated in frequency throughout Miami-Dade and Broward counties, cops said.

Last night, around midnight, the ninja robber returned to a Kwik Stop he held up twice before.

But security precautions had increased since his previous robbery.

The clerk had to unlock the door with an electric switch, for people he deemed legitimate customers.

The thief didn't know that door was locked.

He approached the door and pulled a gun from his waistband, before he realized he couldn't enter and fled.

Once again, the surveillance camera captured footage, only this time it may prove more helpful for police.

"In last night's incident, his mask came down a bit so we got a batter look at his face," said Charney. Investigators are currently analyzing the footage for clues concerning his identity.

"We don't know who it is but we think one person is responsible.

But we have the possibility of a copycat, so we need to study the video to determine that it is, in fact, the same person," Charney said.

The armed man's first recorded robbery was of a Kwik Stop in North Miami Beach on May 12. Since then, he held at least 11 different convenience stores and gas stations.

Anyone with information concerning these robberies should contact the FBI's Miami Division at 305-944-9101.