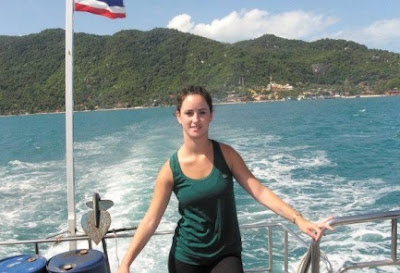 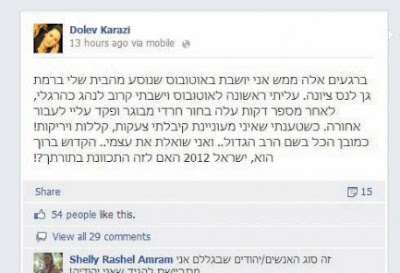 The controversy over the exclusion of women in Israel resurfaced on Thursday when Dolev Karazi, a young woman who boarded an Egged bus in Ramat Gan, claimed that ultra-Orthodox men told her to sit at the back of the bus and proceeded to curse and spit at her.


Karazi said she was considering filing a criminal complaint against those behind the assault. In a conversation about the incident with Israel Hayom, she said that she got on the 319 bus after a day at college to head home to Nes Ziona. She sat in one of the front rows near the driver and during the course of the ride, several ultra-Orthodox men boarded the bus as well. According to Karazi, at one of the stops an elderly haredi man got on the bus, noticed her and demanded that the driver force her to move to the back of the bus.

"I was reading a newspaper and the man, a very old man with white hair, began ordering me to go to the back," Karazi said. "He said that according to the Halacha [Jewish law] women must sit at the back and called me a 'shiksa' [a derogatory term for non-Jewish women], 'holera' [literally 'cholera,' or vile] and 'dirty.'"

Karazi updated her Facebook page as the incident unfolded. "An old haredi man ordered me to move to the back," she wrote. "When I replied that I wasn't interested in doing that, I was shouted, cursed and spat at. I said to myself 'dear God, it's Israel in 2012, is this what you meant in your Torah?'"

In the continuation of her real-time update, Karazi wrote, "I stayed at the front of the bus until the end of my ride. The curses became more obscene throughout the incident. The spitting also got worse. The driver said he couldn't intervene, so I just sat there and remained silent the entire trip."


Karazi told Israel Hayom that at one point during the incident the haredi men asked the driver to do something about her but the driver said he was not permitted to take any such action. She said she was frightened even though she realized she was not in a life threatening situation.


"They did not stop shouting and spitting at me for about an hour until I arrived at my parents' home. Unfortunately, there were no secular people on the bus. Except for one religious woman who told them to leave me alone, and who was quickly silenced by the men, no one was there to stand up for me," Karazi said.

After the incident, Egged released a statement saying that according to the results of an investigation into the incident by the company "the driver rejected a request by an ultra-Orthodox man to force the girl to move to the rear of the bus because he is prohibited by law from doing so."

According to a report by the Israel Religious Action Center released in late Dec. 2011, exclusion of women from the public sphere was dramatically on the rise in Israel during that month. The report cited a 66 percent increase in reported incidents in which women were excluded or discriminated against, where most of the incidents occurred in places such as buses, cemeteries and medical centers.

In the same month, a ministerial committee on the status of women, headed by Culture and Sport Minister Limor Livnat (Likud), held deliberations to discuss the marked increase in the exclusion of women. The committee voted to create an inter-ministerial panel that would submit recommendations for combating the phenomenon.

The committee also agreed that the Civil Service Commission should formulate and publish clear procedural guidelines for state and governmental ceremonies, a move that came after a group of religious IDF soldiers walked out of a military ceremony because they refused to listen to women singing.

In recent months, the battle over the exclusion of women from the public sphere has resulted in rising tensions between Israel's secular and Orthodox communities in the city of Beit Shemesh. Several incidents of gender discrimination in the city have lead to public demonstrations and political activism in an attempt to stem the phenomenon.