House Arrest for Driver Who left 4-year-old in Car, Where Boy Was Later Found Dead 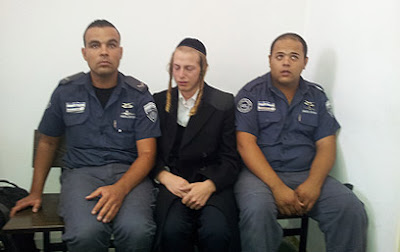 The Jerusalem Magistrate's Court has decided against remanding a Modiin Illit resident who is suspected of leaving the 4-year-old Haim Boimel in a car for hours, leading to the boy's death.

Police sought to extend Nahman Stitzer's remand for five days on Friday but the court opted instead to place him under house arrest. Stitzer, 22, who works as a teacher, is suspected of negligent manslaughter.

Police were hoping to keep the suspect under remand over concerns that he would disrupt the investigation but Judge Anna Schneider ruled that he be placed under complete lockdown at his parents' home.

During the remand hearing police representative Shabtai Shmueli said that Stitzer was also suspected of running an illegal school transportation service, which is why the victim was in his car.

Shmueli noted that "in order to augment his livelihood , the suspect offers transportation to and from school on his way to work.

The entire incident came about due to negligence.

This is a private car into which he put five or more children between the ages of three to four. Some had seatbelts on, some did not."

Shmueli went on to say that "the suspect claimed that when he opened the (car's) back door he noticed something go by and thought it was the deceased. The back windows of his car have curtains so he couldn't see what was going on in the back.

"The suspect claimed that he left the spot assuming that the child was no longer in the vehicle, locked the car with a remote control and continued on his way.

The suspect also claimed that he usually goes out to his car throughout the day to get cigarettes, sadly, it didn't happen on the day (of the incident), he had his cigarettes on his person so he did not go out to the car."

The investigation revealed that Stitzer went back to his car a few hours later with another teacher at which time they noticed a child lying on his side in the back seat of the car.

Stitzer and the other teacher suffered from severe shock and could not contact emergency services which is why they ran over to other teachers for assistance. A Magen David Adom team pronounced the boy dead at the scene.