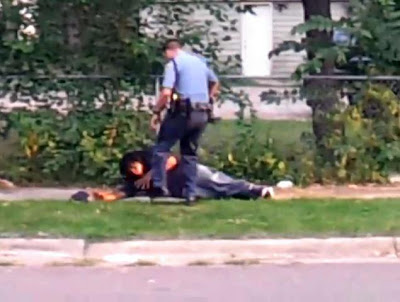 Police in Minnesota are investigating a case of police brutality after an officer in St. Paul was filmed kicking a man in the face during an arrest.

Hightower is lying on the ground and shouting at Zilge that he didn't do anything and doesn't know why he's being arrested, the video shows.

Hightower starts coughing - bystanders say officer had pepper-spayed him - and Zilge kicks him in the face or the chest before cuffing him.

Zilge and another officer then pull the burly suspect to his feet and slam him on the hood of their cruiser before searching him and placing him in the back seat.

St. Paul Mayor Chris Coleman called for an investigation into the incident, saying the video "raises serious questions about the conduct of the officer."

"I have high expectations for the department and its employees. We will fully investigate and take appropriate action," the mayor said in a statement.

St. Paul Police Chief Tom Smith ordered an investigation Wednesday, local station KARE reported.
or Stitts, a friend of Hightower's and the man who shot the video, said the two were walking together Tuesday evening when the cops drove up, hopped out and maced his pal.

"You see he's clearly choking on the mace, not resisting arrest or anything - kicked him in the face for no reason," Sitts told KARE while watching the video. "Nobody can understand why he would do that."

Zilge has been placed on administrative leave pending the outcome of the investigation.