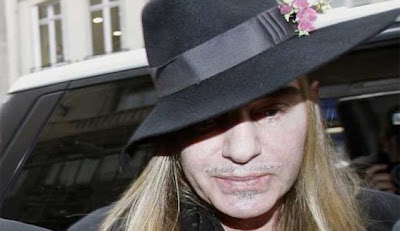 John Galliano has been stripped of France's prestigious Legion d'Honneur. According to Reuters, the fashion designer was stripped of his medal following anti-Semitic behavior.

The newspaper Le Point, among other French media, reported that a presidential decree published on France’s official journal said Galliano may no longer wear the medal - France’s highest honor – which he received in 2009, according to JTA.

Last year Galliano, a British citizen, lost his job as design director at Dior after he was filmed making anti-Semitic statements.

A French court later ruled he had made "public insults based on origin, religious affiliation, race or ethnicity" in several incidents.

In one incident, Galliano stated his love for Adolf Hitler at a Paris bar and told people he believed were Jewish that their mothers should have been gassed.

He blamed his outbursts on addictions to drugs and alcohol. Galliano is 51 years old.

Moshe Kantor, president of the European Jewish Congress, told JTA that the decision to strip Galliano of the title was "appropriate and just." Kantor, who received the French medal earlier this year, added: "These types of medals should be more than just about talent in a particular sphere and should also reflect a person's contribution to society and their personal character. Galliano showed in his outbursts that his views are divisive and hateful."

The text of the decree, which was published on Aug. 20, was not immediately available as French authorities issue such announcements only in printed form, wrote the JTA.
Posted by joe levin at 8:06 AM