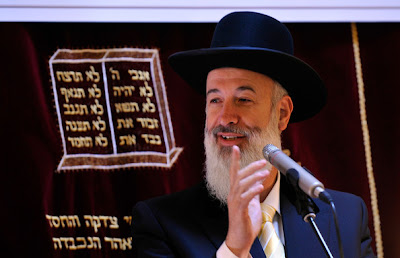 Israel's leading rabbi has warned Dutch populist politician Geert Wilders that his party's support for a ban of ritual slaughter of animals in the Netherlands is "anti-Semitic" and could drive away the country's Jewish community.


Wilders rose to prominence in the Netherlands denouncing the growing influence of Islam in the West, calling for a ban against Muslim immigrants, a halt to the construction of mosques and a ban on Muslim face-veils.

Some of his most outspoken supporters are in the conservative, pro-Israeli movement in the United States. Wilders calls himself Israel's "greatest friend" and has also proposed creating a national Dutch holiday to commemorate the victims of the Auschwitz concentration camp.

In a letter to Wilders on Tuesday, a copy of which was obtained by Reuters on Wednesday, Israel’s Ashkenazi chief rabbi, Yona Metzger, called on Wilders' Freedom Party to stop backing a ban on ritual slaughter.


It is the strongest public condemnation yet of Wilders' position on the policy and comes two weeks before the Netherlands holds a general election September 12 in which he is expected to take a sizeable portion of the vote.

"It is obvious that one cannot be at the same time a friend of Israel and the Jewish people and on the other hand support an anti-Jewish law," Metzger wrote.

"By denying Jews to live according to the Torah you will eventually force them to leave the Netherlands where they enjoyed religious freedom for centuries."

Metzger wrote that he was "shocked and upset to learn that your party once again has adopted a total ban on ritual slaughter in its platform."

"This is the classical anti-Semitic way our rites have been targeted and demonized throughout history," he wrote.

Wilders has transformed the political climate in the Netherlands and his anti-Islam, anti-euro Freedom Party was the third largest in the most recent elections.


Recent polls show Wilders' party winning between 15 and 19 seats in the 150-seat parliament, down from the 24 seats he won in the 2010 election.

Wilders was not immediately available to comment on the letter.

A bill proposed by an animal rights party stating that livestock must be stunned before being slaughtered passed through the lower of house of parliament in June 2011, but did not make it through the senate, where a compromise was reached allowing the practice to continue.

Both Muslim halal and Jewish kosher laws require animals to be conscious when they are put to death. Some 3,500 cows are slaughtered annually according to the Jewish kosher ritual in the Netherlands.

The loss of backing from prominent Jewish leaders could be damaging to Wilders, who has enjoyed support from pro-Israeli and anti-Islam organizations in the United States.

He has received death threats because of his anti-Islam views and has around-the-clock security.


Manfred Gerstenfeld, a prominent Israeli author, said in a telephone interview from Jerusalem that the banning of ritual slaughter has been used in Europe to deter Jews.


"Are you going to support a guy who is at forefront of the anti-Semitism movement in Europe?," he said.

The Netherlands, where Anne Frank hid as a teenager in an Amsterdam canal house until being murdered by the Nazis, had one of the highest rates of Jewish deportation during World War Two.
Posted by joe levin at 8:27 AM