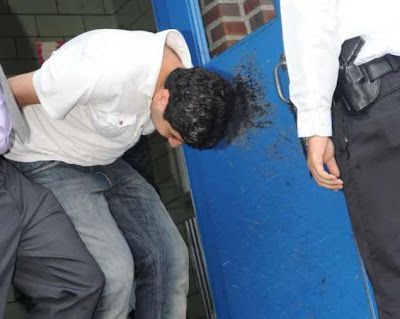 NEW YORK  — Police in Brooklyn said they have arrested a man who burglarized the home of a prominent rabbi not once, but twice.


Rabbi Yehezkel Zion, of the Congregation Beth Torah, came out to the 66th Precinct in Midwood to see the man who allegedly burglarized his home be taken out in handcuffs on Monday.

Denis Ildatov, 25, hung his head in shame and called officers “scumbags” as he was escorted to the car, CBS 2′s Amy Dardashtian reported.

Clear surveillance footage captured a man, who authorities said was Ildatov, stealing a menorah that is worth nearly $10,000, along with other religious items, from Rabbi Zion’s home.

Last week, the suspect was seen dressed like a religious Jew with a yarmulke on his head when surveillance video captured his alleged actions.

The menorah was given to the rabbi by someone he provided guidance to for 20 years.

“When he gave me the menorah, he told me that I [enlightened] his life that’s why he gave me a gift of light. And what this guy did is basically darkness — to come into a person’s home, walking around for 10-12 minutes, come again after one hour, try to steal more. My daughter doesn’t want to [be] downstairs by herself now — she afraid,” Zion told CBS 2′s Dardashtian.


Zion said he feels sorry the suspect hit such a low point in his life and was driven to steal.

A volunteer civilian patrol was said to be instrumental in the suspect’s capture.

Authorities said Ildatov may be responsible for a dozen burglaries in the area.