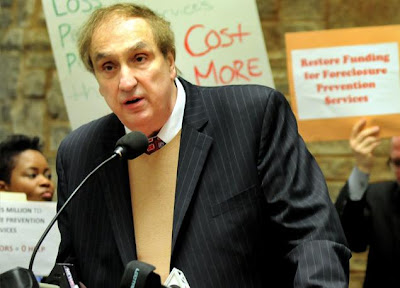 Assemblyman Vito Lopez could face criminal charges in the ongoing sexual harassment scandal that has doomed his political future.


The Brooklyn DA called Friday for a special prosecutor to investigate the Brooklyn Democratic boss for allegedly preying on young female aides.

Charles Hynes, who has longstanding political ties to Lopez and a daughter who used to work for him, made the call as the drumbeats calling for Lopez to resign have gotten louder.

Lopez was stripped of his leadership positions in the state Assembly after the Assembly ethics committee substantiated the claims of two former staffers who accused Lopez of groping them and making their lives hell after they resisted his creepy advances.

Two other aides received a six-figure settlement after lodging a separate workplace harassment complaint this year.

Hynes said in a statement that the ethics committee advised him that some of the possibly criminal behavior it reviewed occurred in Brooklyn.


Hynes said he’s referring the case to a special prosecutor because his longstanding relationship with Lopez requires him to recuse himself from any investigation.


Lopez has denied abusing any staffers and so far has resisted calls for him to step down, though he has agreed to relinquish his position and Brooklyn Democratic party chair.


“I believe they are not true and they are unfounded,” he told The Daily News last week.