The Problem With Beis Din 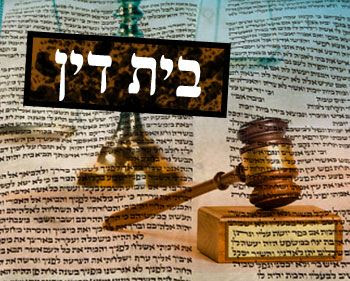 An op-ed in the Huffington Post brings the 'Crown Heights Din Torah' ruled by Monsey Dayan Rabbi Avrohom Rosenberg why there's a "need for a Rabbinical Court of Appeals."

"You set up judges and law enforcement officials for yourself in all your cities that the Lord, your God, is giving you, for your tribes, and they shall judge the people [with] righteous judgment.

You shall not pervert justice; you shall not show favoritism, and you shall not take a bribe, for bribery blinds the eyes of the wise and perverts just words." --Deuteronomy 16:18-19


This week, hundreds of thousands of Jews worldwide will read the Torah portion, Shoftim, "Judges," which begins with the above verses.

The parsha directs the Jewish people to establish a just rabbinic court system consisting of righteous judges, experts in Jewish law, unsoiled with bribery and corruption.

Rashi, the most authoritative commentator on the Bible and Talmud, expounds on the verse "You shall not show favoritism," explaining that even during the preliminary petitioning, judges should not direct one litigant to stand while allowing the other to sit -- the appearance of favoritism for one might cause the other litigant to lose faith in the court and assume that there is no point in arguing his case.

According to Jewish law, in most circumstances, it is forbidden to litigate civil disputes in a secular court. Instead, we are required to argue before a rabbinic court, also known as a Beis Din. Historically, traditional Jews took this prohibition very seriously and throughout the generations have continuously resolved their disputes in rabbinic courts.

Lately, there has been a shift, and many people in the United States are reluctant to appear before rabbinic courts, believing them to be unsystematic, disorganized and perhaps even outright corrupt.

It is true that many rabbinic courts don't keep transcripts or records of proceedings.

Additionally, some rabbinic judges are paid by the hour, and I know of several cases of unexplained prolonged litigation.

Recently several rabbis questioned the legitimacy of their colleagues on a prominent rabbinic court in Kings County, N.Y. Five outside judges were hired to hear the case.

Each of the sides chose two rabbis, and Rabbi Rosenberg from Monsey was hired to be Chief Justice.

After many months and hundreds of thousands of dollars in costs to both of the parties, the Rosenberg court ruled that only two of the rabbis currently on the disputed court were legitimately elected and instructed the community to hold elections for a third rabbi.

The Rosenberg court set out several qualifications for those seeking to run, including the need for rabbinic ordination, and was responsible for vetting the candidates.


After the election, a senior rabbi on the disputed rabbinic court petitioned the Rosenberg court to disqualify the Rabbi-Elect, on the grounds that he was never ordained and did not have the required rabbinic ordination certificate and was therefore ineligible according the Rosenberg Court's own criteria.

Obviously, the implications of this story were very embarrassing to the Rosenberg rabbinic court, whose job it was to vet the candidates, but the impact goes beyond the Rosenberg court, in that such events undermine public confidence in the entire rabbinic court system.

A complaint was also filed to the Rosenberg court questioning their ability to be impartial.

Since if the elections are overturned, they may be responsible to refund the thousands of dollars their apparent mistake cost the community.

The Rosenberg court did not recuse themselves at that point. Instead they delivered a majority ruling that the Rabbi-Elect was indeed ordained properly.


The ruling was issued despite the fact that the rabbi who allegedly ordained the Rabbi-Elect denied ordaining him. Several prominent rabbis objected to their ruling. Eventually, disagreements arose from within the Rosenberg court. The case is now before honorable Judge Karen B. Rothenberg in New York's Kings County Supreme Court.

Unlike the secular court system, there is no appellate rabbinic court system in the United States to petition to if rabbinic judges err and no oversight committee to insure a fair legal process.

The Holy Tzaddik Rabbi Menachem Mendel of Rimanov (1745-1815) was once approached by a widow who complained to him that she had lost a case in the town's local rabbinic court. Reb Mendel sent the court a message asking them to take a second look at their Talmudic sources because he thought they may have erred.

The rabbinic court concluded that indeed a mistake was made but were bewildered: How could Reb Mendel have possibly known?

Reb Mendel told them the verse states, "Pekudei Hashem yesharim mesamchei lev," which translates to, "The edicts of God are just, and gladden the heart" (Tehillim 19:9.).

He said, "I saw by this women's saddened heart that it couldn't possibly be Pekudei Hashem, 'the edicts of God,' since it did not gladden her heart, so I realized you must have erred."


But that story is exception. Most people don't have access to an authority like Rabbi Menachem Mendel to intervene.

Establishing appellate rabbinic courts would go a long way in restoring faith in the court system.

By Yaacov Behrman Huffington Post.
Posted by joe levin at 9:34 AM