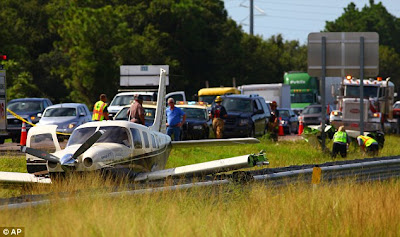 HILLSBOROUGH COUNTY, Fla. - A small plane carrying three people made a harrowing landing on a Florida highway on Thursday morning after officials said it rapidly lost fuel and hit a power line.

The single-engine plane piloted by 64-year-old Craig Pulliam managed a hard landing in the median of Interstate 75 just east of Tampa but lost a wing and an estimated 70 gallons of fuel in the process.

Hillsborough County Fire Rescue units responded to the scene just after 9.30 am to the witness of surprised morning commuters who snapped pictures of the unusual sight in the traffic’s crawl.

All three men on board the flight headed to Miami from Davis Islands were uninjured, the Tampa Bay Times reports.

Shortly after take-off, at about 4,000ft, the pilot reported seeing a low voltage light signalling a loss of fuel in the single-engine aircraft.

Realizing an emergency landing was imminent, the pilot first looked to land the black and white 2004 Piper Saratoga II on the interstate’s southbound lands, according to a Florida Highway Patrol report.

In the last moments he opted for the highway's median instead, preventing what he suspected would result in further crashes.

During its emergency landing officials say a part of the plane hit a power line and a wing was clipped by a road sign, leaving parts of it wrapped around and visible from the roadside.

Officials said an estimated 70 gallons of fuel spilled onto the ground, prompting a hazardous materials team to the scene.

With traffic backed up on both sides for several miles along the interstate, the Florida Highway Patrol cautioned the plane's removal taking well into the evening.

'We're going to offload the fuel from the one wing and then they're going to disassemble that wing, put it on a flatbed trailer and haul it out,' said Hillsborough Fire Rescue Captain Jim Chastain explaining its removal to ABC.