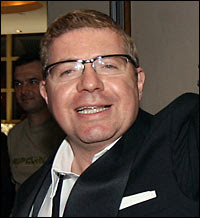 RIGA, Latvia — A body recently discovered in a forest is apparently that of a Russian-born U.S. businessman who disappeared in mysterious circumstances more than four years ago from his villa in a resort in Latvia, police said Wednesday.

The process of identification is still under way, but it could help police finally determine what happened to Leonid Rozhetskin, a millionaire who made his fortune in Moscow and spent much of his time in Los Angeles and London.

Police spokeswoman Sigita Pildava said DNA samples taken from a body found four weeks ago in a forest near the seaside town of Jurmala match those from Rozhetskin’s nearby villa taken after his disappearance on March 16, 2008.

“The DNA from the body in the forest ... coincides with that from his house in Jurmala,” she said. “But we cannot say yet that this means it is his body.”

Police will now compare the DNA samples to those of his family members to confirm the identification, she said. Pildava declined to give further details and could not say when the results of a post-mortem would be available.

Rozhetskin’s credit card was found on the corpse, police said.

Rozhetskin was seen leaving the villa with two unidentified men in the early hours of the morning, according to the Russian-language daily Telegraf.

When investigators searched the house later in the week they found traces of blood on the floor, which they said matched the DNA of his personal items.

Born in Leningrad — now St. Petersburg — Rozhetskin moved to the United States in 1980. After receiving a degree from Harvard Law School, he moved back to Russia in 1992, where he made his fortune after the collapse of the Soviet Union.

He eventually helped establish Renaissance Capital, a top investment bank and brokerage in Moscow that had been at the epicenter of Russia’s turbulent financial sector in the 1990s.

In 2001, he became deputy chairman of Russia’s Norilsk Nickel, the world’s largest producer of nickel, a post he left in early 2005.

He spent much of his time at his homes in Los Angeles and London. In 2003, he bought the villa in the Baltic Sea resort, popular among wealthy Russian businessmen and situated about 15 kilometers (10 miles) west of the Latvian capital, Riga .