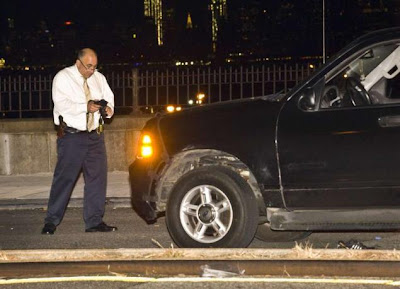 A man beaten unconscious by two thugs on a Staten Island street was then accidentally run over by an off-duty cop in an SUV as the suspects fled early Thursday, witnesses said.


The battered and bloody victim was rushed to Staten Island University Hospital after the 2:30 a.m. attack on Richmond Ave. near the ferry terminal, sources said.

The vicious assailants “left him there to just basically die,” one woman told the Daily News. “Then he was laying there, and an off-duty cop came and hit him.”

According to witnesses, the victim absorbed a savage beating from the two men — who repeatedly smashed the outnumbered man with their fists until he collapsed in the street.

“It was two guys beating up somebody ... they knocked him out right on the floor,” said a man who watched the whole thing.


The attackers bolted and jumped inside a taxi cab to make their escape, the male witness said.

As they were fleeing, the off-duty officer accidentally ran over the body with his Ford Explorer. Witnesses said the driver never saw the man lying in the darkness in the middle of the street. The man had to be rescued from underneath the vehicle.

“He was smashed up underneath, like an accordion,” said the female witness. “It was awful.”

Police were reviewing surveillance video from nearby cameras as they searched for the two suspects. No arrests were made in the brutal attack, cops said.