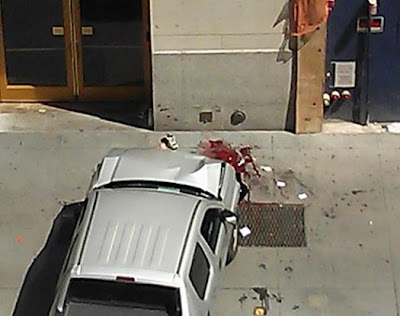 
A zooming Honda pickup pinned the man against a building at 45 Broad Street, by the Leman Manhattan Prep School, at about 1:30 p.m. witnesses and authorities said.

Pedestrians rushed out of the path of the truck as it zoomed south on Broad Street, said Brian Godleski, a witness.

“Two or three people dove out of the way,” said Godleski, 33, of Washington Heights. “Then it barreled into the guy who was standing against the wall, eating Chinese food.”


The truck then backed up, and the victim “stumbled around and collapsed to the ground,” said Godleski. “That was the most f---ed up thing I have ever seen. It scared the s--- out of me.”


“I just saw a guy die in front of my eyes. What if that guy has been me?” he asked.


As cops and firefighters rushed to the scene, the truck driver “sat there with his head down, shaking his head,” said Aigne Goldsby, 22, of Harlem.

The unidentified man was dead on arrival at Downtown Hospital, authorities said.


A woman who couldn’t get out of the way fast enough was also taken to Downtown Hospital with a leg injury.