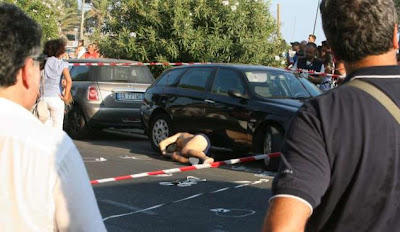 MILAN — Authorities were searching Friday for a gunman who shot and killed an organized crime boss clad in a swimsuit as he walked from a beach to join his family at a hotel in a resort town south of Rome.


Gaetano Marino — a boss from the Neapolitan Camorra — was hit by at least four shots to the head and another five or six to his back Thursday afternoon after he left the beach en route to his hotel in Terracina, 100 kilometers (60 miles) south of Rome in Lazio region. His family had gone ahead of him back to the hotel, police said.

The shooting caused panic along the crowded beach, and witnesses told police the gunman fled the scene in a small gray car driven by a second man.

Marino, 48, headed the Scissionisti , or “secessionists” clan, which had fought a bloody turf war in the streets of Naples for years with the rival Di Lauro clan over control of drug trafficking.

Marino was known by the nickname “Moncherino,” or stump, after he lost both hands in an explosion while planting a bomb in the 1990s. He stirred public outrage by appearing in the front row of a state TV audience this year while his 12-year-old daughter dedicated a song to him.


The Camorra has not hesitated in the past to assassinate rivals or traitors in public places, and Marino’s killing was being investigated as a hit by rivals, either inside or out of his own clan.


In the last few years, street killings blamed on mobsters have occurred in the Lazio region, including Rome, fueling fears among investigators that the Camorra, as well as the ‘ndrangheta organized crime gang from southern Calabria, have moved some of their interests near Italy’s capital.