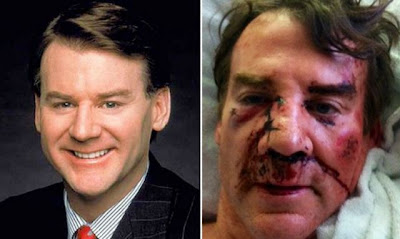 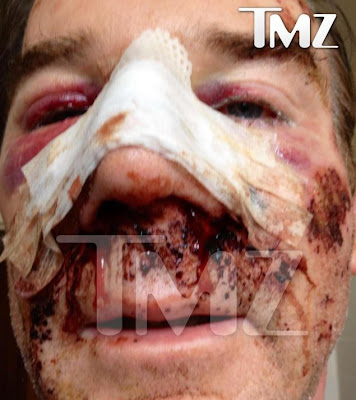 These are the pictures of high-flying Deutsche Bank executive Brian Mulligan after he was allegedly beaten by police in Los Angeles.


Mulligan, who serves as the managing director and vice chairman of media for the powerful international bank, claims he was brutally attacked by the LAPD, leaving him bruised, bloodied, and with lacerations across his face.


The grisly pictures show both before and after he underwent facial surgeries for a nasal fracture, allegedly after the beat-down.

Mr Flanagan insists that officers concluded the banking executive was not under the influence of any drugs at the time of the alleged altercation, according to TMZ.

They told the celebrity gossip website: ‘Mulligan had committed no violations of law and was not arrested. No drugs were found during a search of his person…and the officers found absolutely no evidence of drug use by Mulligan.’

A representative for the Los Angeles Police told MailOnline that no statement has been released regarding the case.

According to an initial police report, Mulligan, 53, appeared 'out of it' after officers responded to 911 calls about a man trying to break into people's cars at a drive-thru in Highland Park.

CBS Los Angeles, citing a police report seen exclusively by the station, reported that officers were told by Mulligan he was high on marijuana and had ingested ‘White Lightning,’ another term for bath salts, and had not slept for four days.

The bank executive was spotted wandering in a confused state by passers-by on May 15, 2011 at around 10.40pm.

Due to his erratic behavior, officers called a senior officer to the scene, who carried out a drug evaluation.

There was no definitive evidence of a controlled substance that the LAPD test for, according to the police spokesman.

Mulligan told officers he was 'tired and exhausted' and asked to be escorted to his car so he could collect belongings to go to the local Highland Park Motel.

When they reached the vehicle, there was a large amount of money in the car, causing officers to call for back-up as is protocol. Mulligan was then left at the motel by officers without further incident.


Later that night at around 1am, the same officers who dropped Mulligan off at the motel responded to reports of a man trying to get into vehicles.

They saw Mulligan in the street, running into oncoming traffic. Officers called him back on to the sidewalk, but rather than comply, Mulligan assumed a ‘combative stance’, striking martial arts poses.

At that point, officers were forced to subdue Mulligan adding that a ‘use of force then occurred' before he was arrested.


The businessman's injuries required him to be admitted to hospital for facial lacerations and as many as 15 nasal fractures.

Earlier this month Mulligan sued the LAPD for $50million, saying that during the 2011 encounter he was battered by the police.

Mulligan, a graduate of the University of Southern California, has worked at numerous high-profile firms, including Fox, NewsCorp, and Universal Studios.

Premiere Magazine voted him as one of the '50 most powerful people in Hollywood' and the Los Angeles Business Journal voted him 'One of the 10 most prominent bankers in Hollywood'.


From 2003 to 2008, he served on the board of Napster as the Director, Chairman of Nominating & Corporate Governance Committee and Member of Executive Committee.

According to documents obtained by the MailOnline, the Deutsche Bank executive further alleged that the LAPD officers in question were holding him hostage at the motel where he was staying as a means to steal the $5,000 he had on his person at the time.

Mulligan’s lawyer Michael Flanagan said in his claim that the officers stopped him on a sidewalk in Los Angeles and discovered $5,000 cash in his car.

At that point, Mr Flanagan said that his client was driven to a hotel and told he would be killed if he attempted to leave.


He was also told that he would not be allowed to call his wife Victoria, to let her and their children know where he was.

When, after a few hours, Mulligan did try to leave, Mr Flanagan said that police found him and beat him mercilessly.

'At that point, he was in such great fear that he believed the LAPD officer were not truly LAPD officers but may be impostors bent on robbing or killing,' the suit reads.

According to TMZ, Mulligan was booked for resisting arrest as well as interfering with law enforcement.

The Deutsche executive suffered facial lacerations and as many as 15 nasal fractures, which will require extensive reconstructive surgery.


Lt Andrew Neiman said the Force Investigation Division has opened an inquiry into Mulligan’s arrest, adding that it will likely be a year before it is completed.

A spokesman for Deutsche Bank declined to comment on the case, but said that Mulligan has since been to work since the events in May.

His attorneys estimate that the incident has caused him the loss of $500,000 already and in the coming years, amount to a loss of $5million.