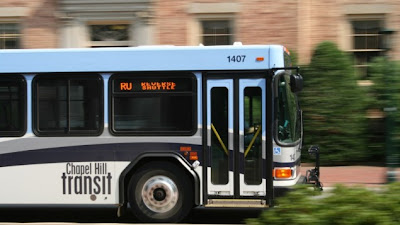 CHAPEL HILL -- City buses in the small college town of Chapel Hill, North Carolina, were recently stripped of anti-Israel ads and are now at the center of a public debate concerning advertisements, national policy and local sensitivity.


On August 13, 98 buses operated by Chapel Hill Transit began displaying an ad calling for an end to US military aid for Israel. When some passengers complained about the ads, CHT removed them, according to a report in the Chapel Hill News.

But that move angered the ad’s sponsors as much as their appearance angered its detractors. The Chapel Hill town council plans to discuss the city’s policy for bus advertisements and decide if and how it applies to this situation.


The Church of Reconciliation, a local Presbyterian church with some 350 members, sponsored the ad, which is part of a national campaign coordinated by the US Campaign to End the Israeli Occupation.

It shows two older men holding their grandchildren and carries the caption “Join with us. Build peace with justice and equality. End U.S. military aid to Israel.” One of the men in the photograph is a Palestinian who claims that his West Bank home has been demolished five times. The other man is a member of the Israeli Committee Against House Demolitions.

The local initiative was launched by the church’s Salaam-Shalom group.

The church claims that the ads cost it approximately $1,500 to print, and an additional $1,200 to run on the town buses for one year. Pastor Mark Davidson of the church was quoted by Chapel Hill News saying that it did not “want to engage in anything that was disrespectful or offensive… [but rather] wanted something that would get people thinking.”

Chapel Hill Transit advertising policy states that all “political, religious, or ‘issue related’ advertising” must contain a conspicuous paid advertising disclaimer, which the Church of Reconciliation ads did not have. Davidson said the church is willing to comply with the condition in order to have the ads return to the buses.


The transit policy also reserves the right to exclude advertising in order to “maintain an image of neutrality on political matters and other noncommercial issues that are the subject of public debate and concern.”

Penny Rich, the only Jewish town council member, said in an email to Chapel Hill News that the town has a responsibility to understand the connection that Jews have with Israel, and that it is necessary to “extend our respect by not accepting political ads that will offend our Jewish citizens.”

Local citizen Dan May wrote to the town council that he thought the ad violated the transit authority’s viewpoint-neutral restriction, and that CHT was “creating the type of environment where captive riders are forced to view and endure such divisive and emotionally charged material.”

One of the members of the town council, Jim Ward, acknowledged that the issue walks a very delicate line between respecting the First Amendment right to freedom of speech while “maintaining a positive/neutral ambiance on and about our buses and transit system,” according to the local paper.

The Church of Reconciliation is a Presbyterian USA church. In July leaders of the Presbyterian USA movement narrowly voted down a proposal to divest from three companies that do business with Israel and by a wider margin rejected labeling Israel’s presence in the West Bank as “apartheid.” However, they did approve a motion to boycott all products made in the West Bank.


Chapel Hill has approximately 57,000 residents, more than half of whom are students at the University of North Carolina. According to the local Jewish Federation website, there are approximately 6,000 Jews living in Chapel Hill and the adjacent city of Durham.

Pending the decision by the town council, the Church of Reconciliation expressed hope that the ads will be back up by this weekend.

“Chapel Hill needs to be the kind of place that can have a strong, robust discussion of the issues of the day,” said Davidson. “We don’t need a sterile public square.”
Posted by joe levin at 8:19 AM