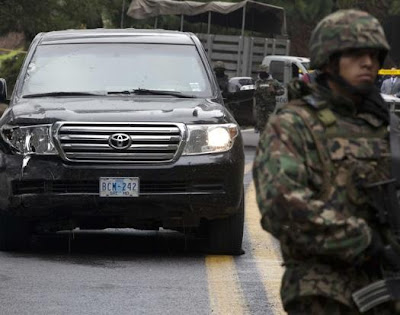 MEXICO CITY — Two U.S. government employees were shot and wounded in an attack on their vehicle south of Mexico City on Friday, a law enforcement official said.


The two were riding in an armored U.S. Embassy sport utility vehicle when they came under fire on a highway leading to the city of Cuernavaca.

The official, speaking on condition of anonymity, said both were hospitalized, one with a wound to the leg and the other hit in the stomach and hand.

The official said the wounded were not agents of the Drug Enforcement Administration or FBI.

A Mexican army official said the SUV with diplomatic plates was found after a report about a shootout on the two-lane highway. The army official was not authorized to be quoted by name. He said a Mexican navy captain was also in the vehicle, but was not injured.


The Toyota vehicle was riddled with bullets, most concentrated around the passenger-side window, indicating possible involvement by experienced gunmen.

The shooting occurred on road winding through a mountainous area where drug gangs, common criminals and leftist rebels have been known to be active in the past.

Attacks on diplomatic personnel were once considered rare, but this is the third attack in two years.

In 2011, one U.S. Immigration and Customs Enforcement agent was killed and one wounded in a drug gang shooting in northern Mexico.

A drug-gang shooting In 2010 in the border city of Ciudad Juarez killed a U.S. consulate employee, her husband and another man.