5 LAPD officers under investigation in death of woman 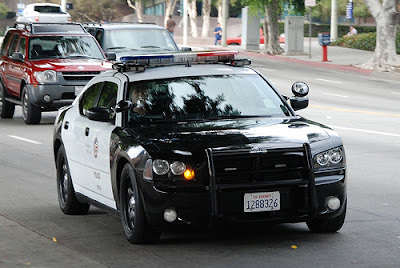 At least five Los Angeles police officers are under investigation in the death of a woman who stopped breathing during a struggle that included an officer stomping on her genital area and the use of additional force by others to take her into custody, police officials confirmed Thursday.


The altercation in front of her South Los Angeles apartment was captured by a patrol car's video camera.

When asked by The Times about the incident, LAPD Cmdr. Bob Green confirmed that one officer, while trying to get Alesia Thomas into the back of a patrol car, threatened to kick Thomas in the genitals if she did not comply, and then followed through on her threat.

After officers forced Thomas into the back seat of the police car, she is seen on the video breathing shallowly; she eventually stopped breathing.

"I take all in-custody death investigations very seriously," LAPD Chief Charlie Beck said in a statement late Thursday. "I am confident we will get to the truth no matter where that leads us."

The incident came to light a day after Beck announced he was transferring a captain from his command after a separate videotaped incident in which officers were shown slamming a handcuffed woman to the ground. Beck said that video raised concerns and that the department was investigating the officers.

The Thomas case occurred in the early morning hours of July 22 after she left her 3-year-old and 12-year-old children at the LAPD's Southeast Area station, according to a department account released the following day.

Green, who oversees the Southeast Area station, confirmed that Thomas tried to surrender custody of the children to police because she was a drug addict and felt she could not care for them.


Officers went in search of Thomas, finding her at her home in the 9000 block of South Broadway. After questioning her briefly, the officers attempted to arrest her on suspicion of child endangerment, the department's account said.

Thomas "began actively resisting arrest" and one of the officers took her to the ground by sweeping her legs from beneath her, the LAPD's official account said.


Two others handcuffed Thomas' hands behind her back and attempted to lead her to a patrol car while a supervising sergeant observed, according to the department's version.

Two more officers were summoned as Thomas continued to struggle. Green confirmed that Thomas was a large woman. A "hobble restraint device" — an adjustable strap — was tightened around Thomas' ankles to give the officers more control and she was eventually placed in the back of the patrol car, the LAPD account said.

The official account, however, made no mention of what Green confirmed was a female officer's questionable treatment of Thomas.

The department's account said officers immediately notified paramedics. It is unclear whether the officers attempted to resuscitate her and how much time passed before paramedics arrived. Thomas died shortly after being transported to a hospital.

A neighbor who witnessed part of the incident told The Times he did not see officers do anything wrong and described Thomas as the aggressor.

Gerald McCrary Sr., 55, said he was awakened by the commotion and saw police wrestling with Thomas, who managed to break free from plastic handcuffs.

The officers secured her with metal handcuffs and tried to calm her down as she sat against a wall, McCrary said.

"They were talking to her, asking her to calm down, that everything will be all right," he recalled. They brought Thomas some water to drink.

Two officers escorted her down the stairs in her apartment complex, one on each arm. McCrary eventually followed and said he saw Thomas in a patrol car "shaking her head against the back seat." Some time later, he saw her sprawled out on the sidewalk without a blouse. Paramedics had just arrived.

McCrary said police interviewed him on two separate occasions about the incident but never mentioned that Thomas was dead.

"I didn't see them try to harm her in any shape or fashion," Hood said. "I seen them protect her from hurting herself."   Beck's statement said he wanted to find out whether Thomas had been under the influence of any drugs or suffered from a medical condition that could have caused her death before he passed judgment on the officers.

Four police officers and the sergeant were removed from field duties immediately after the incident and the department is conducting criminal and administrative investigations into the officers' conduct.

The Aug. 21 incident began when the officers pulled over Michelle Jordan at a Del Taco restaurant in Tujunga because she was holding a cellphone while driving. As the 5-foot 4-inch Jordan left her vehicle, she allegedly failed to comply with officers' commands to get back into the car and was slammed to the ground by the male officers and placed in handcuffs, according to police officials.

While cuffed, she was led to the officers' patrol car. Moments later, she was slammed again to the pavement, apparently with more force, by one of the officers, who was much larger than Jordan, the officials said. The video footage appears to show the two officers exchanging high fives after Jordan was taken down.

Beck said he believed the captain "was severely deficient in his response" for failing to notify superiors and remove the two involved officers from the field. The chief said he ordered the footage shown at roll calls when officers begin their shifts.

Hiltner, a 34-year LAPD veteran, could not be reached for comment.


By Joel Rubin, Angel Jennings and Andrew Blankstein - L.A. TIMES
Posted by joe levin at 9:16 AM