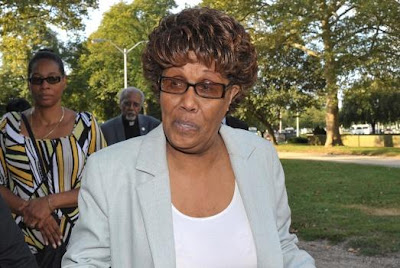 State Sen. Shirley Huntley arrived at a Nassau County courthouse this morning to face charges related to her stewardship of a Queens non-profit program.

Flanked by two dozen supporters, Huntley did not comment to reporters as she met representatives from the state attorney general's office.

Sally J.M. Butler, Huntley's attorney, said that she was unaware of the exact nature of the charges Huntley would be facing.

Huntley, along with consultant David R. Gantt and Senate aide Patricia D. Savage, were led out in handcuffs as supporters cheered them on as they were taken to a nearby precinct be processed before facing a judge later today.

The embattled pol called a strange press conference on Saturday, announcing she would surrender to authorities today -- though the lawmaker didn’t specify what charges she’d be facing.

Butler spoke through most of the haphazard event outside the senator’s home, in front of which stood a campaign sign urging voters to re-elect her in the upcoming Democratic primary.

Her arrest comes months after damning reports revealed that her ties to nonprofits allegedly cost taxpayers more than $400,000.

The Post first reported last year how Huntley, a who represents Jamaica, Laurelton and South Ozone Park, tried to direct $155,000 to her Parent Workshop nonprofit.

An investigation by state Attorney General Eric Schneiderman followed, and in December, he announced the indictments of four alleged schemers.

The indictments led Huntley allies to cooperate with the state investigators, said a source with knowledge of the probe.

The indictments charged Savage, who served as Parent Workshop President and who worked as a Huntley Senate aide, as well as Lynn H. Smith, the nonprofit’s treasurer, with being involved in a scheme to steal taxpayer money.

Gantt, a consultant, and Roger N. Scotland, president of the Southern Queens Park Association, were also charged with falsifying records.

Chatter of a looming Huntley indictment persisted for months after.

The rumors moved closer to reality Friday night when the senator’s rep contacted news outlets with a cryptic invitation to the 11 a.m. press conference in Jamaica, where two men stood guard outside Huntley’s house.

A Huntley relative who emerged to pick up a pizza delivery grew hostile with reporters and photographers, even though they had been invited to be there.

“You guys should get a life!” she roared.

A woman answering Huntley’s phone told reporters the senator was in meetings or sleeping, refusing to put her on the line.

Huntley started the Parent Workshop in 2006, eight months before being elected. Once in office, she authorized a $30,000 grant and tried to send another $125,000 a year later.

The other consultant, Gantt, who also earned $15,000, was purportedly paid for conducting workshops for parents and making “outreach visits” to schools and community groups, workshop documents show.

“The appropriate forum in which to respond to the senator is a court of law, where the attorney general will prove all facts according to the rules of evidence,” spokesman James Freedland said. “Those facts will speak for themselves.”