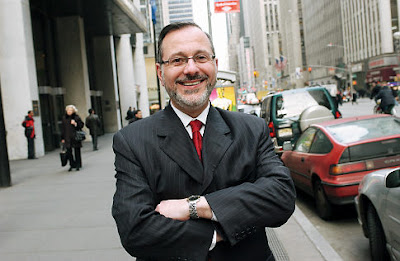 Maxed out your credit cards? No problem. You’ve got a Dear friend in court.


Half a dozen attorneys who appear regularly before Dear told The Post they couldn’t remember winning any credit-card cases in his court, even when defendants admitted they owed money.

“He literally throws out millions of [dollars] a year that is legitimately owed to direct creditors like Citibank and Discover,” said one lawyer.


In Dear’s sprawling, 11th-floor courtroom in Downtown Brooklyn, there’s no secret whose side he’s on.

“I like to fight for the underdog,” he once said — adding that he believed 90 percent of credit-card debt to be faulty.

So he routinely dismisses motions by collectors, finds fault with their records and witnesses and makes quick rulings against them, sometimes proceeding right to trial the first time a matter is in front of him, lawyers said.

One suit involved Felicia Tancreto, a 55-year-old Bensonhurst resident who was found by another judge to owe $16,107.12 on her AmEx platinum Costco card — a debt she’d racked up through personal shopping.

Tancreto appealed the judgment before Dear in April, claiming she contacted the credit-card company sometime in 2010, notifying it that she was undergoing surgery and couldn’t keep up payments.

She said that she asked to have the bills deferred and that the company sued.

Dear ruled in her favor, canceling the entire balance because he deemed the company’s key witness, Lisa Salas, a 25-year employee in accounting, not credible.

The judge called her testimony “robo.”

The term, coined from a similar and scandalous tactic in the mortgage-fraud crisis, describes a practice in which collectors present mass-produced sworn statements to back their claims.

The problem with the AmEx accountant and documents she presented in support of Trancreto’s debt was that Salas did not have “personal” knowledge of the charges, Dear argued.

He expected her to remember having sent the bills to Tancreto.

AmEx followed up with an unusual motion: It asked Dear to step aside on its cases, arguing that he’d lost all objectivity as a judge.

Critics of the collection industry say it’s plagued by abuse, particularly when third parties buy up debt for pennies on the dollar and then hound cardholders, sometimes using shady “robo” tactics.

Often these the agencies have no reliable information about what might be owed.

Dear is not the only judge to go to bat for deadbeats — or to slam collectors for using robo testimony.

Ciaffa recently ruled against Discover in its bid to collect $4,600 from cardholder Patrick Shimer, blasting Discover’s account manager, Stacey Holmes, for lacking knowledge about the charges.

“The affidavit signed by Ms. Holmes has the look and feel of a robo-signed affidavit that was prepared in blank in advance of knowing who would sign the affidavit,” the jurist wrote.

“Although she purportedly made the affidavit based on her review of the plaintiff’s business records, she evidently had no idea when she signed the affidavit that the last statement showed a $0.00 new balance.”

Ciaffa noted that robo signing didn’t automatically nullify a debt, but “it gives this court pause.”

One lawyer said there was a “big difference between Judge Dear and Judge Ciaffa.

“Ciaffa knows what he’s doing, and he’s carefully applying the law. He doesn’t expect a business- records witness to remember having sent a bill to a certain cardholder on a certain date.

By BRAD HAMILTON and GREGORY BRESIGER -NY POST
Posted by joe levin at 7:45 AM