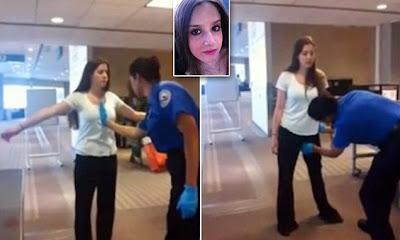 A video has been posted on the internet by a woman who claims she was 'violated' by a TSA agent during a full body check.

Jessica is an activist who fronted a national TSA opt-out campaign last year.

The video, which lasts just over three minutes, captures the incident on 23 May.

Jessica and her mother both requested a full body scan - the reasons are unknown - and took turns filming the incident.

In the video repeatedly asks the unidentified TSA female agent not to touch her vagina, breasts, or her mother's private parts.

Jessica told InfoWars.com that she and her mother were told by the TSA agent that they would undergo 'an extensive pat down which would involve going all the way up the leg.'

The TSA screener first placed her hand on Jessica’s breasts, prompting her response: 'Sorry, you just touched my boob.'

After Jessica tells the TSA agent that she does not want her breasts touched, the TSA agent threatens to stop the screening process, effectively prohibiting Jessica from flying.

The PhD student and researcher agrees to allow the pat down to continue, but flinches when the TSA agent feels high up on the inner part of her leg.

'She just touched my vagina, seriously, that was not my upper thigh,' declares Jessica as she steps away from the agent.

The day after the incident Jessica posted on her Twitter page: 'Was violated pretty badly by TSA at San Diego International Airport yesterday. Video will be on my YouTube channel.'

When she posted it on YouTube several users wrote that the TSA agent was acting within guidelines.

But Jessica hit back:'To all those people saying that I'm "overreacting" - if you went up to someone on the street and touched them like that you'd probably be arrested. It's really sad that so many people have habituated to this type of treatment.'