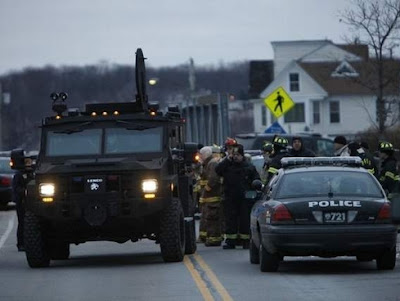 A gunman shot four firefighters and killed two of them at the scene of a house fire in the upstate New York town of Webster on Monday morning, officials said.


The Monroe County Sheriff's Office evacuated the neighborhood after at least one shooter attacked near Rochester. The Christmas Eve blaze burned three homes and a car as firefighters fought flames alongside cops searching for the shooting suspect or suspects.

Fire crews were called to put out a single house fire along Lake Road just after 5:30 a.m. But as the blaze spread to two other homes and a vehicle, firefighters were forced back amid chaos when a shooter started gunning down their colleagues, Sheriff Patrick O’Flynn said.


Two died, but at least one firefighter was listed in satisfactory condition at Strong Memorial Hospital in Rochester, Webster Fire Marshal Rob Boutillier told the Democrat and Chronicle.


And a SWAT team swept into the area and evacuated parts of the neighborhood, Webster resident Michael Damico told the Democrat and Chronicle.

“Some people on this bus already watched their houses burn,” Damico said. “They’re not happy.”


Visit NBCNews.com for breaking news, world news, and news about the economy