My boss fired me for refusing to have rough sex 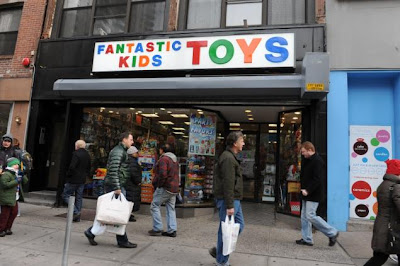 This was one bad Santa.


The owner of an upper East Side children’s toy store was slapped with a lawsuit accusing him of forcing an employee into a master-slave sex relationship.

Amanda Reyes, 26, a former manager at Fantastic Kids Toys on Third Ave., said boss Steven Reis fired her after she tried to get out of having regular rough-sex sessions with him, a lawsuit filed Friday claims.

Reyes’ attorneys said she was “forced to engage in an ongoing sexual relationship” with the sixtysomething shopkeeper that “included increasing acts of ‘rough’ sexual activities, including hitting, slapping and biting,” in exchange for employment and rent.

The young woman tried to break it off when she began dating a hunky new NYPD squeeze in June, but claims Reis — who demanded she “meet twice a week for those sexual encounters” — refused to take no for an answer.

Found working at his bustling toy store on Christmas Eve — crammed with board games, baby dolls and action figures — Reis refused to comment.

“I really don’t have any comment,” said the casually dressed boss, who is married.

Reyes was hired at $10 an hour in December 2010 and was promoted to store manager around the time their master-slave relationship began in March 2012, the suit says.

He added, “It would take place at her apartment. As part of her compensation, he was paying her rent among other expenses.”


Reyes, who has a young daughter, believed it to be “a manipulative master-servant type of relationship,” her attorney said.

“She was a single mother, trying to take care of a young child and she felt totally and completely manipulated and taken advantage of,” Harman added.

She allegedly lost her $60,000-per-year gig on Aug. 29 when she tried to break off the relationship.

Reyes’ mother, Marisel Rojas, said she recalled her daughter was dating her boss but never met him.


“I know they were seeing each other and she was working there for a while. They were getting along fine to my knowledge,” said Rojas, who said she is not in close contact with her daughter.

But now, Reyes’ Facebook photos show her cheek-to-cheek with her new cop boyfriend, hanging out on the couch and in the city.