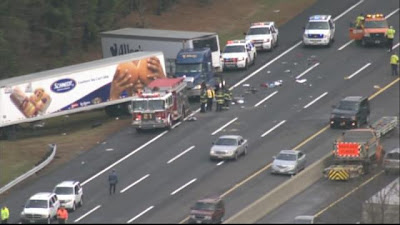 Part of the southbound New Jersey Turnpike was closed after an accident claimed three lives.

All of the vehicles ended up on the shoulder after the crash. One passenger vehicle was in a ditch.

It happened on the southbound side of the turnpike south of Interchange 5 and County Route 541. Cars and trucks share the same lanes in that area of the turnpike.

Southbound traffic was being diverted off the turnpike at Exit 7-A.

The cause of the accident is under investigation.