Priest and rabbi: Giants need an act of God 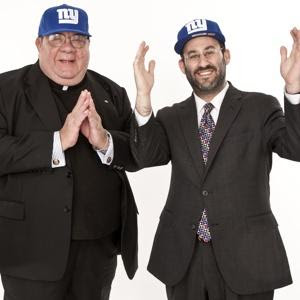 
With the team needing a win today and help from above to make the playoffs, Father Peter Colapietro and Rabbi Dovid Cohen are praying for a holiday miracle:

Another postseason for Big Blue.

“It’s for this specific situation. Hey, it worked for Mickey Rourke,” he said, noting the deeply depressed actor prayed to Saint Jude in 1995 before resurrecting his career.

Cohen was similarly confident in a higher authority.

“In the Talmud, it’s forbidden to give up hope. Even when they have a sword on your neck, God can still save you.”   The two Manhattan holy men believe prayer can help lead this team to the promised land.

“When things are dire, one speaks to God in his own words,” said Cohen, who, as rabbi at Young Israel of the West Side on West 91st Street, serves a congregation packed with fans of the defending Super Bowl champs.


“If you’re a Giants fan, I can imagine saying something like: ‘Please, God, let the Giants make the playoffs. I will be so thankful.’ ”

Or you could strike a deal with the Almighty.

“Some people will make an offer, like a promise to attend services more often, if their team wins,” Cohen said.

Father Pete, pastor at the Holy Cross Church in Times Square, knows the gridiron like he knows the scriptures. He’s attended 17 Super Bowls, two of them won by the G-men.

But he acknowledges that this team — which lately has stunk to high heaven — could use divine intervention.

“It’s not only a win” they need, the priest noted. “It’s three other things.”

At 8-7, the Giants can only make the playoffs if they beat the Eagles today at home (1 p.m. kickoff, Ch. 5) — and if Dallas, Chicago and Minnesota all lose.

If all those stars do not align, they’ll miss the chance for the team’s first back-to-back Super Bowl titles — and to move into a tie with the San Francisco 49ers and Dallas Cowboys for second-most Vince Lombardi trophies.

“Now is the time to pray,” said Cohen.