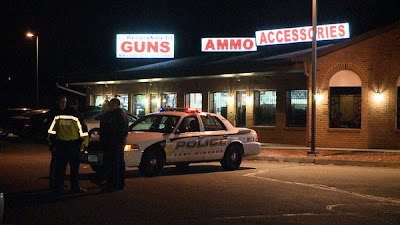 EAST WINDSOR —  Federal firearms inspectors were examining business records Thursday at an East Windsor gun shop that sold a weapon to the mother of Adam Lanza, the gunman who shot 20 children and six adults a week ago at Sandy Hook Elementary School in Newtown.

Deborah Seifert, a spokeswoman for the federal Bureau of Alcohol, Tobacco, Firearms and Explosives, said Thursday that the agency was "involved in an enforcement operation in the East Windsor area," but would not elaborate.

Other law enforcement sources said that Lanza's mother, Nancy, bought one of several weapons she owned at Riverview Gun Sales. But those sources said the interest of federal agents in the store grew out of events at the store that are not related to Nancy Lanza's purchase.

The sources said that Nancy Lanza's guns appear to have been purchased legally and registered properly.


Lanza, who lived with his mother, shot her repeatedly in the head before driving to the school and killing the first grade students and educators. Authorities have said Lanza used a Bushmaster .223-caliber, semiautomatic rifle purchased by his mother. Lanza shot himself as police arrived at the school.

Three law enforcement sources said Nancy Lanza bought the Bushmaster rifle at the East Windsor store. But Seifert declined to discuss the purchase of the rifle and the owners of the store could not be reached Thursday. A telephone recording said the store was closed in 'respect" for the deaths in Newtown.

Seifert said Thursday that neither Nancy nor Adam Lanza are believed to have engaged in target shooting over the last six months.

Two law enforcement sources said that, on Thursday, ATF agents returned to the store to re-examine records that they had examined on a prior visit.

On Saturday, a South Windsor man — who had received a suspended prison sentence and two years probation in May on charges of stealing a dozen rifles and shotguns from Riverview Sales — tried to steal a sniper rifle from the same store, police said.


Jordan Marsh, 26, pleaded guilty May 10 to a single count of stealing a firearm and received a suspended prison sentence and two years of probation.

According to East Windsor police, on Saturday, Marsh grabbed a Bushmaster .50-caliber rifle from Riverview Sales valued at $5,000 and ran from the store. When store employees confronted Marsh, he pulled a knife, then fled on foot. Police officers eventually caught and arrested him.


In June 2007 a Somers man who occasionally worked at Riverview Sales was charged with stealing 33 guns from the business. In that case the store's owner, David E. Laguercia, contacted ATF after determining his store could not account for 33 firearms. Video surveillance showed the man taking two guns.

In March 2008 that man pleaded no contest to two counts of stealing a firearm from the store and received an 18-month suspended prison sentence.
Posted by joe levin at 7:33 AM