Like it or not, next chief rabbi plans to speak for all of UK Jewry 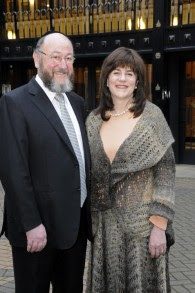 LONDON — Confounding expectations, the incoming British chief rabbi, Ephraim Mirvis, said he hopes to act as a spokesman for the entire Jewish community on the national stage.


“I intend to represent the community as an ambassador to the outside world,” he told The Times of Israel, adding that this would be one of his top priorities in office.

The statement will surprise many British Jews, who widely expected that Mirvis, who does not currently have a national profile as a speaker, would concentrate primarily on internal issues in the Jewish community.

He also indicated that he hoped to speak for all British Jews, not only for members of the United Synagogue, the group of Orthodox shuls that officially employs the chief rabbi.

Neither Haredim nor the non-Orthodox denominations defer to the authority of the chief rabbi, and in recent years, the Progressive Movement has been increasingly vocal about its rejection of the chief rabbi as the figurehead for all Anglo-Jews. A statement issued by the Reform Movement welcoming Mirvis’s appointment referred to him as the “Orthodox chief rabbi.”


“My formal role extends to a specific number of congregations,” said Mirvis. “[Outgoing chief rabbi] Lord [Jonathan] Sacks made his mark beyond the confines of the community, and I will likewise be seeking to do that. There is a clear understanding — the chief rabbi has a voice nationally.”


In one of his first interviews since he was appointed as the next chief rabbi on Monday, Mirvis outlined his vision of leadership. He said he would “empower” rabbis belonging to the United Synagogue by opening a new department of rabbinic development that would provide “adequate resources to undertake initiatives and engage in creative initiatives for their communities.”

“The rabbis will find in me personally someone who cares about their future and welfare,” he said.

He also plans to increase educational programs, both formal and informal, identifying education as the key to reversing the decline in membership of the United Synagogue. He turned his own North London community, Finchley United Synagogue, into a “flagship” shul by pioneering a variety of educational initiatives such as the Kinloss Learning Centre, he said.

“‘Rabbi’ means ‘teacher,’ and I see the role of chief rabbi as chief teacher,” he added.

During the eight-month search process for the chief rabbi, one of the most contentious issues was the candidates’ attitudes toward the London Beth Din, or religious court. Although it is officially part of the United Synagogue, its dayanim, or judges, are seen as having blocked much of the progressive agenda with which Sacks came into office.

According to Miri Freud-Kandel, a fellow in Modern Judaism at the Oxford Centre for Hebrew and Jewish Studies and an expert on the institution of the chief rabbi, establishing his authority over the beth din is crucial because it will affect Mirvis’ ability to influence the religious direction of the community.
This will be “his most important internal challenge,” she said.
Posted by joe levin at 7:48 AM