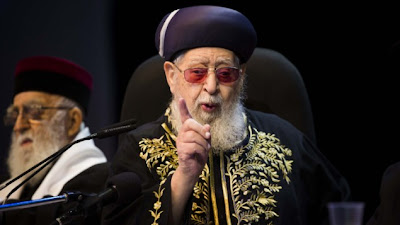 Rabbi Ovadia Yosef, the spiritual leader of the ultra-Orthodox, predominantly Sephardic Shas party, has called on all yeshiva students who support Shas to take a break from Torah study and start canvassing ahead of the January 22 elections, Army Radio reported on Saturday.


“I’m turning to all students to get up from their Torah [studies] and begin going door-to-door to make a difference,” the 92-year-old rabbi was quoted as saying. “The more votes we have, the more we can bend the prime minister. He won’t have a coalition without us.”

On Thursday, in a fierce excoriation that brought Israel’s subterranean racial tension to the surface for the first time in this election season, Deri lashed out at Liberman, claiming that he and Likud-Beytenu were on a crusade against Sephardi politicians.

“Once the people’s party, Likud-Beytenu has become an arrogant and smug party that represents Russians and white people,” said Deri, responding to an interview in which Liberman derided Shas and asserted that the Interior and Housing ministries wouldn’t remain in the hands of Shas’s top MKs, but would rather be given to Likud-Beytenu parliamentarians.

Liberman — who recently resigned as foreign minister to fight corruption allegations but remains No.2 on the joint Likud-Beytenu list — had reserved a special barb for the ambitious Deri, a charismatic ex-convict who’s in the midst of a political comeback, remarking: “Aryeh shouldn’t be a minister. It’s beneath him.”

Deri later retracted his comments, claiming the racial references were made in the heat of the moment.

“I apologize,” he said. “That’s not my style. I never speak like that. They [immigrants from the former Soviet Union] are my brothers.”

Shas and Yisrael Beytenu, arch rivals on the issues of state and religion, have been stepping up rhetoric against each other as next month’s elections near. Yisrael Beytenu, which represents the largely secular Russian-speaking population, wants to change certain policies currently guided by religious concerns, like marriage and mandatory military service.
Posted by joe levin at 8:21 AM