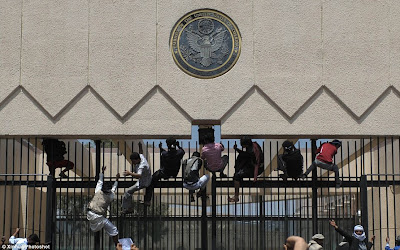 SANAA, Yemen — Al Qaeda's branch in Yemen has announced that it will pay tens of thousands of dollars to anyone who kills the US ambassador in Sanaa or an American soldier in the country.


An audio produced by the group's media arm, the al-Malahem Foundation, and posted on militant websites Saturday said it offered three kilograms of gold, worth $160,000, for killing the ambassador.

The group said it will pay 5 million Yemeni riyals ($23,000) to anyone who kills an American soldier inside Yemen.

It did not say how the bounty could be collected, but said the offer is valid for six months.

The bounties were set to "inspire and encourage our Muslim nation for jihad," the statement said.

Washington considers al Qaeda in Yemen to be the group's most dangerous branch.
Posted by joe levin at 11:12 AM