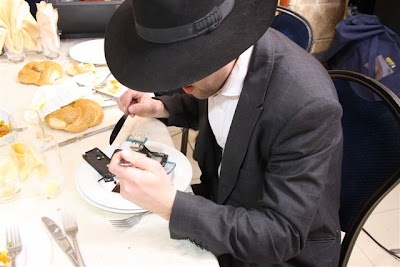 A flyer distributed in synagogues throughout Betar Illit Friday declares "war" on the increasingly common practice of entering synagogues with smartphones.

" It even warns that the children of transgressors will not be allowed to study with other children.


The flyer was signed by a group calling itself "Saving the Generations" that claims to be operating under the guidance of Torah greats. It did not rule out all cell phones, but focused on smartphones, or "unapproved" phones.

In a very long sentence, the flyer explains that, "Since the plague of iPhones, Blackberries and the likes has unfortunately spread in our camp, despite their being banned by all the Greats of Israel, to the point that those who hold these instruments do not feel ashamed to enter the congregation of G-d, and even take it out in full view in the shtibalach (prayer halls) and other public places, and no one says anything, we have therefore decided upon the advice of rabbis to create an action committee for a great campaign and to fight fiercely against this danger in every way possible."

The organization announced that it will appoint "supervisors" in every community, whose job will be to approach whoever enters the synagogue with a smartphone, and demand forcefully that he leave the premises.
Posted by joe levin at 8:34 AM