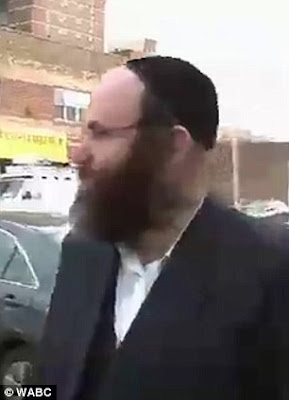 A Brooklyn fishmonger was charged by the police on Wednesday with throwing bleach in the face of a rabbi who is an outspoken advocate for victims of sexual abuse in the borough’s ultra-Orthodox Jewish community.

The fishmonger, Meilech Schnitzler, 36, of Williamsburg, turned himself in to the 90th Precinct station house around 1 p.m., the police said.

Mr. Schnitzler, identified in state corporate filings as the chairman of the company that owns Schnitzler’s Famous Fish, is accused of tossing a cup of bleach at Rabbi Nuchem Rosenberg while he was walking near Mr. Schnitzler’s store Tuesday.

The bleach caused burns to Rabbi Rosenberg’s eyes and face and discoloration to his clothing, the police said.

Rabbi Rosenberg told the police that he recognized his assailant as Mr. Schnitzler, the son of a man he had accused on his blog and call-in line of being a molester. Mr. Schnitzler’s father has not been arrested in or charged with a crime.

The rabbi and the Schnitzler family are part of the Satmar Hasidic community.

Rabbi Rosenberg said Mr. Schnitzler spit on the street in front of him about a year ago. He said of the bleach-throwing: “What exactly triggered him to do that, I have no idea.”

Calls to Mr. Schnitzler’s home and business were not answered on Wednesday afternoon.

Rabbi Rosenberg has been an outspoken critic of the Brooklyn district attorney, Charles J. Hynes, accusing him of ignoring crime in the ultra-Orthodox community for financial and political benefit.

He has also said that, in the past, acts of intimidation against him were not taken seriously by the prosecutor’s office.

On Wednesday, Mr. George filed a request for a special prosecutor, arguing that Mr. Hynes’s history of being criticized by Rabbi Rosenberg constituted “a potential conflict of interest in this case.”

But Mr. Hynes said in a statement, “I will vigorously prosecute the defendant in this case, and nothing supports any compelling legal need for another venue or prosecutor.”