Israeli rabbis warn: Yule be in trouble if you put up Christmas trees 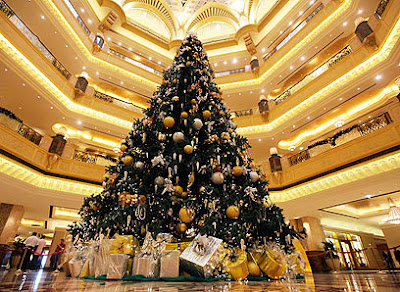 As New Year's Eve approaches, the dispute over celebrations renews. Restaurant and banquet hall owners in Haifa are lashing out at the local Rabbinate for threatening to revoke their kashrut permits if they host celebrations on December 31.


A letter sent by the Rabbinate it clearly stated that "no parties celebrating Christian New Year's Eve should be held on the premises, and our supervision will be further denied to those who disobey our instructions."

The Rabbinate also warned the owners to stay clear of leasing the halls to so-called "ordinary" parties during these dates, since "it is completely prohibited to hold any celebration marking the Christian New Year."

Secular factors slammed the Rabbinate, accusing it of religious coercion, deviating from its authority and abusing its power over an issue that was irrelevant to food kashrut.

They further stated that this was twice as upsetting due to the fact the city of Haifa was comprised of a large Christian population.

Mickey Gitzin, chairman of the Israel Hofshit (Be Free Israel) organization, said: "Kashrut in Israel has turned into a business instead of a qualification. It is unbearable that a body funded by the State will be turned into a judgmental inquisition-style establishment."


Rabbi and lawyer Uri Regev, head of the Hiddush organization for religious freedom and equality, said: "It is a clear and intentional trampling of the law, which prohibits mixing different considerations in the process of kashrut permits."

Regev called upon the attorney general to clarify to the local and Chief Rabbinate the severity of their actions and "prosecute those declining to follow the law."

Regev further added, "Every ultra-Orthodox extremist idea is quickly adopted by the state's Rabbinate. It is sad to see the Jewish faith, which was persecuted over generations, abuse the Jewish state authority to persecute other religions. It is causing a huge damage to Israel's rule of law and public image."

Head of Haifa's Religious Council Avi Weitzman said this was a previous decision made by the Chief Rabbinate, binding all local rabbinates.

The Chief Rabbinate responded by saying that kashrut supervision was enforced over food issues only, but that in the event where the kashrut supervisors were not able to be present, such as in the celebration of Christian holidays, the kashrut certificate would be revoked.
Posted by joe levin at 6:11 AM