Haredi women threaten not to vote 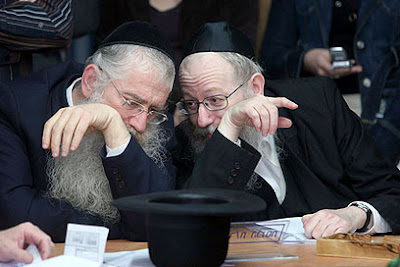 The Shas and United Torah Judaism parties may have joined forces over the petition filed against them over the exclusion of women in their Knesset lists, but not everyone in the ultra-Orthodox public shares the opinion that Jewish religious laws ban women from serving as parliament members.


A group of haredi women believe a woman is allowed to "come out of the kitchen" and that the halachic excuse used by the parties is "misleading the public."

On the other hand, an associate of late Orthodox Lithuanian leader Rabbi Yosef Shalom Elyashiv says the women's claims are part of "an extremely dangerous religious revolution" taking place among the religious public ahead of the elections.

On a Facebook page titled "Not elected – not voting", the group of women commented on the haredi parties' response to the petition filed with the Central Election Committee, arguing that "there is no halachic prohibition against a woman serving as a Knesset member."

According to the women, "People don’t know it, and the parties and their leaders are clearly interested in hiding it," but "women today have access to Jewish holy and literary sources" and can confront Halachic arguments.


"All these are positions which require the women to come out of their kitchen, be in touch with the public, provide service, talk, express themselves."


The women mentioned Deborah the prophetess, who was a judge, a leader and a commander, ruling that "her case is a precedent allowing women to serve in a public role – especially when appointed by the public."

They also argued that Maimonides had reservations over women's service only in regards to the monarchy issue.   "Today, when women serve in so many public roles, why should they have a smaller share in the Knesset– a place where important decisions are made in regards to them, their families and the entire nation? Is the same modesty not important when they are pressed to go out and support a yeshiva student?"


The group of women concluded by saying that the haredi parties were trying to maintain "a paternalistic social structure in which a woman has no voice, in which she is completely paralyzed, in which she is excluded from the important crossroads in her life, and in the life of the nation and State."


They expressed their hope that the haredi representatives in the Knesset would realize that they were the first ones to lose from the absence of women in their lists, and clarified that haredi parties would not benefit from asking women for their vote while silencing them.

Rabbi and Attorney Dov Halbertal, who has been known among the haredi public in recent years as an associate of the late Rabbi Elyashiv, rejected the women's claims, defining them as "harsh rhetoric."

According to Halbertal, their demand is the result of "the entire exclusion of women atmosphere. Unfortunately, there is something sweeping about it, and we must strongly and firmly resist this trend," he said. "It's the nightmare of the greatest sages of Israel."


He also argued that "in these elections there is an extremely dangerous religious revolution – starting with (Habayit Hayehudi Chairman Naftali) Bennett, through (Am Shalem Chairman) Chaim Amsellem, (Hatnua candidate) Elazar Stern and (Yesh Atid candidate) Shai Piron, to such a request. This is our spiritual destruction."

Commenting on the essence of the matter, Halbertal said that serving in the Knesset was completely different from all jobs haredi women were engaging in these days.

"It's a job based on exposure, standing in the limelight. The woman represents, the woman speaks on stage, the woman goes out to the public. This is the embodiment of immodesty. We are not talking about running a school. It's a different planet."

He noted that even Rabbi Abraham Isaac Kook, one of the founders of Religious Zionism, was strict about this issue, even more than the haredi public today, refusing to even grant women the right to vote.

According to Halbertal, the opinion that women cannot serve in such a public role is shared by "all the great sages," and the current argument on the matter reminds him of the dispute over the integration of a woman as a religious council member.

"I remember Rabbi Elyashiv's strong objection at the time, and not just because she was Reform," he said. "In general, modesty – like Shabbat – was the most important value in his eyes. He would cancel necessary protests when he feared they would mix men and women."

The only option for including a woman on a haredi Knesset list, according to Halbertal, is "if there is a great necessity and the great sages advise us that it is a temporary need."

Halbertal further argued that the haredi outlook in regards to the status of women had reservations over additional professions, including some that acceptable in the haredi society today.


He mentioned a yeshiva student who had asked Rabbi Elyashiv whether his wife was allowed to work in a place that would advance her economically and professionally, but where men worked too. The rabbi told the student, "If you don't want her to remain your wife, send her there."

"Think about women who seek to be home more, to devote themselves to raising the children – what kind of example does this set?" Rabbi Halbertal concluded. "A woman is not allowed to serve in the public front under any circumstances. Jewish women have qualities of sensitiveness and a noble spirit, and that would contradict their modesty and status according to the Torah."

The Am Shalem party issued the following statement in response: "We support women's right to vote and be elected for Knesset. Many years ago, Chief Rabbi Ben-Zion Meir Hai Uziel ruled, against the opinion of many rabbis, that women have the right to vote and to be elected.

"In the Hebrew year 5757, Rabbi Chaim Amsellem issued a halachic ruling stating that women are as worthy and talented as men, and sometimes even more. Women are in all managerial, social and economic junctions, and there is no reason for them not to be elected."

The party even has three women on the top 10 slots of its Knesset list.
Posted by joe levin at 8:16 AM