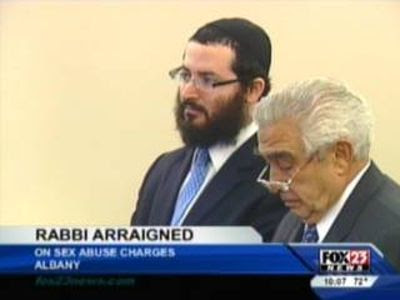 ALBANY — A Loudonville rabbi who admitted having inappropriate physical contact with two 13-year-old boys in 2007 is being sued by their families for alleged sexual assault.


Yaakov Weiss, the founder of Chabad of Colonie and the Chabad Hebrew School, also is being sued for allegedly defaming the youths when he claimed the allegations were "100% untrue" and concocted by a rival, according to court papers reviewed by the Times Union. Weiss has since been suspended and is no longer affiliated with the Colonie Chabad.

The case is set for trial in Jan. 22 before state Supreme Court Justice Eugene "Gus" Devine, though it could be assigned to another judge.

Weiss complained about the civil lawsuit to a rabbinical tribunal in Rockland County, according to people with knowledge of the situation. That body could potentially excommunicate the parents of the victims for taking the matter outside a religious setting.

Weiss, now 32, was convicted of misdemeanor child endangerment in January 2010 when he admitted he knowingly had inappropriate physical contact with the boys separately while naked in a small pool, known as a mikvah, used for ritual purification.


One of the boys was abused in June 2007, the other in November and December that year. The suit said Weiss lured them to a location on Whitehall Road. Weiss had been charged with sexual abuse — the indictment said he placed his penis in contact with the children's buttocks — when he took the plea.

The plea did not require he register as a sex offender, an outcome that upset the parents of one the boys. In an interview with the Times Union, the parents said they trusted Weiss with their boy to the same degree as if their son had been home with them.

"It turned out not to be the case," the father said, speaking on the condition of anonymity. "You feel betrayed, you feel disgusted and you feel that you would like everything to be thrown at him within the boundaries of the legal system ... we found out the legal system doesn't always do everything."

They were not pleased with his sentence — 60 days and 3 years' probation — which they called light.

"We wanted him on the registry," said the mother, referring to the New York State Sex Offender Registry.

The boy's mother said they only learned of Weiss' abuse after their son told another youth who, in turn, reported it to an adult.


"The first thing I wanted to do was throw up," she said.

Weiss admitted in his plea that he told one of the boys to lie to police and his mother about the abuse, telling him, "just say nothing happened."

The parents said they hope the civil suit will hold Weiss accountable in a way the criminal justice system did not.

The lawsuit stated that even after Weiss pleaded guilty, he and his attorney, Arnold Proskin, continued to allege that the case was rooted in a "Chabad turf war" between Weiss and another area Chabad emissary and that Weiss "molested nobody."

The suit said the remarks were "false, defamatory, denigrating and slanderous."

Ancowitz, the attorney for the families, declined comment. Weiss' lawyer could not be reached.