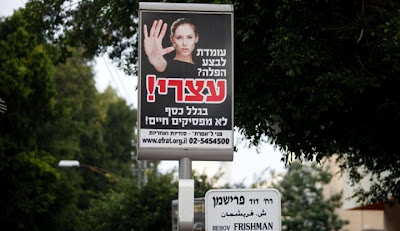 A new protest has surfaced on my Facebook feed these days. It isn’t over the high cost of living or election nonsense; it's a different kind of fight.

It is a fight by those who've decided to take on the aggressive advertisements of Efrat, a non-profit organization whose purported aim is to help young women struggling with an unwanted pregnancy.

Efrat's ads are ubiquitous: On the radio, they ask, “Pregnant and need help? Call Efrat.” The group's billboards are even more misleading:


They depict a secular young woman, with a blond ponytail and a smile, offering help to women in crisis. In reality, though, any woman who thinks she’s been lucky enough to find help in discreetly getting an abortion instead discovers a fleet of volunteers aggressively trying to convince her not to have one, telling her it's an un-Jewish act that endangers our very existence here.

Visitors to Efrat’s website are greeted by a four-minute video that plays automatically and shows Dr. Eliyahu Schussheim, the physician who heads Efrat, persuading a young woman not to have an abortion, while a banner featuring dozens of smiling babies hovers at the top of the webpage.

A few months ago, as part of a nauseating campaign, booklets were placed in the mailboxes of Tel Aviv apartments (not for the first time) depicting the development of a fetus from the moment of conception until it is fully formed, crying out to its mother from the womb: “Mom, don’t kill me! Today I grew fingernails and developed other essential organs.”

I experienced this firsthand a few years ago, and I can confirm that a single woman in Israel seeking an abortion experiences a bureaucratic tangle of dizzying proportions that is nothing short of Kafkaesque.

Again and again, you must prove your pregnancy to a number of professionals whose approval you seek. First, you must undergo an ultrasound as the technician gawks gleefully and gives you the first photograph of your unwanted fetus.

Then you must fill out dozens of forms and questionnaires and appear before a medical committee that decides your fate. If the medical establishment sees that you don’t regard your pregnancy as sacred, they react with disbelief.

Almost every physician on the committee – and there are quite a few – pokes and prods around your body and soul to determine how a strong and healthy Jewish uterus can inflict such an injustice on its people. A series of painful probes takes you up a humiliating chain of command.

The state needs your uterus, daughter of Israel, and you feel this need even more when you try to refuse this decree.

Of all the examinations and personal questions I had to endure about the status of my relationship and the quality of the condoms I bought, the meeting that stands out the most is the one with a social worker.

The pleasant woman who chose the most 'giving' profession on earth tossed questions at me from an official form. She could not understand why a healthy, educated young woman of 24 would not want to continue her pregnancy.

“Why do you want to have an abortion?” she asked in astonishment. “Because even though I want to keep on living with my partner and have children with him eventually, I’m still studying for my bachelor’s degree and working part-time, so I don’t see any way I can raise this baby.” Surprised at my honesty, she asked what my partner thought.

“He feels the same way I do,” I answered. “We want to live together without children at this stage in our lives.” Just let her think I’m sane, I thought to myself.

Even though I wanted to sound as clear-headed as possible, there was a storm raging inside me.

I imagined myself and my partner climbing up the four flights of stairs in our filthy building in south Tel Aviv, standing in our tiny apartment and trying to decide where to put the crib of the baby we were coerced into bringing into this world. Maybe we could build a shelf for it, I thought.

The social worker brought me back to reality by pushing the approval form toward me. I stammered my thanks and got out of there.

But what happens to women who don’t get approval to abort? While waiting in one of the endless lines during the process, other good Jewish women carrying unwanted pregnancies told me that married women never get authorization.

They have to prove nothing less than insanity or significant physical disability to get approval for an abortion.

By what right do these committees and non-profit organizations decide whether I can or cannot be a mother? How is it that another person besides me can decide such a thing? It’s inconceivable that the state should invade our souls and our wombs in this way.

Two years ago, at a racist, right-wing demonstration, we stayed silent when signs reading “The Jewish womb belongs to the Jewish people” were hoisted.

Now, let us shout to the heavens, go out into the streets and destroy Efrat's misleading and humiliating billboards. Let us raise our voices in opposition to the humiliating medical committees and be the masters of our fates. We have worth – and not just when we are pregnant.
Posted by joe levin at 8:23 AM