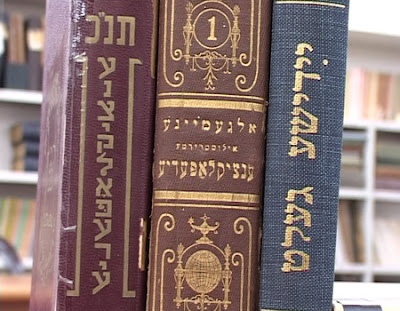 "I find a certain mystery in Yiddish, a refined and enigmatic musical note. I cannot explain it, but I have always felt a connection to this language."


Contrary to what one might expect, the speaker is not a Polish poet or a German philosopher. He is Yusuf Alakili, 50, of the Arab Israeli town of Kfar Kassem, who is working on his master's degree at Bar-Ilan University's Literature of the Jewish People Department, while studying Yiddish for his own pleasure.

How did this affair begin? "In the 1980s I worked with a Jew of Polish descent in Bnei Brak, where Yiddish was the dominant language. I was fascinated by its sound and decided to study it earnestly. My dream is to read Sholem Aleichem's 'Tevye the Dairyman' in its original language."


And what bothers him? "I don't know who to blame, but I don't understand why this magnificent language, which has such an extensive body of literature, is being neglected. Did you know that (Nobel Prize laureate Shmuel Yosef) Agnon started writing in Yiddish and only later turned to Hebrew?" he asks.

Alakili is not alone. About one-quarter of the 400 students studying Yiddish at Bar-Ilan University are Arab, says Dr. Dov-Ber Kotlerman, the academic director of the the Rena Costa Center for Yiddish Studies.

According to Dr. Kotlerman, some of the Israeli Arabs are looking for ways to connect to the Jewish culture which they must get along with, and it's not easy.

"Jews also searched for a way to connect to the local culture in the Diaspora, and it's wonderful that Yiddish can serve as an ambassador and bridge between nations and cultures," he says.

"For example, take Tevye the Dairyman, whose daughter married a Christian and he sat shiva (the week-long mourning period in Judaism) for her. Two years ago, I was approached by an Arab student who told me her father would do the same thing had she ever fell in love with a Jew."

Salam Bashra, 22, of the Arab Israeli city of Tira, is completing her bachelor's degree in Arabic literature. The Yiddish language and culture move her, she says.

"Even back in high school I loved Hebrew literature. During my Yiddish studies I became acquainted with Sholem Aleichem and the early writings of Agnon, and I also saw different films, like the wonderful movie 'The Cantor of Vilna.'

"The experience of losing the cantor's son is a universal experience, which everyone can identify with," says Bashra, who hopes one day to write her master's thesis on the similarities between Arab and Yiddish literature.
Posted by joe levin at 7:13 PM