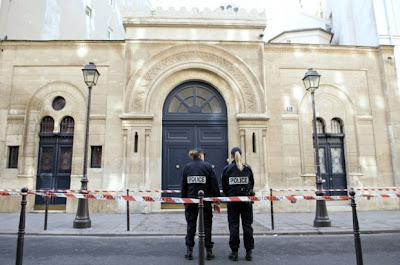 Police in Paris reportedly arrested a man on suspicion that he participated in attacking a Jewish man outside a synagogue.


The suspect was apprehended shortly after he and the other three attackers, who escaped, allegedly attacked the 47-year-old Jew on Dec. 20 as the victim was coming out of a synagogue in the French capital’s 19th Arrondissement, the French daily Le Parisian reported.

The officers were stationed outside the synagogue because of frequent attacks on Jewish institutions and individuals in and around Paris.

The culprits continued to hit the man as he was on the ground, the report said. It quoted a source as saying that it was not certain that the attack was anti-Semitic in nature but that this was being investigated.