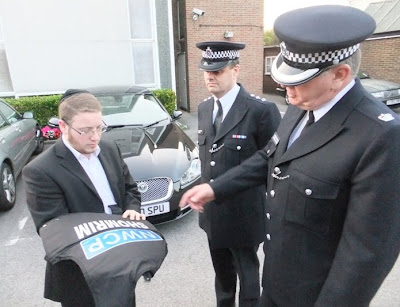 The community has been warned to be on guard against gangs that target Jewish pensioners and families in a major credit-card scam.


Volunteers from the Shomrim community security group thwarted an attempted fraud in Golders Green last week. They were called as scammers worked to trick a couple into handing over credit cards and PIN details.

The JC understands that, earlier this month, a Jewish woman from Edgware was tricked into handing over £20,000 to a gang operating a similar scam.

Police said gangs from eastern Europe and South America were targeting older couples, and that a number of Jewish families in north-west London had been hit by similar scams.

The attempted Golders Green theft began last week when a Jewish pensioner received a phone call from a woman claiming to be from HSBC bank.

She told the man that his security details had been compromised and that a courier would be sent by the bank to collect his credit cards. The scammer told the man to type his pin number into the phone and then to put the phone down and call 999.

But when he attempted to do so she stayed on the line and played a recorded message, fooling the victim into believing he was reporting the matter to police.


What the woman did not know was that the man’s wife had simultaneously called Shomrim on her mobile phone.

Seven members of Shomrim’s rapid reaction team waited in the couple’s Bridge Lane home and in unmarked cars outside. They told the pensioner to put an old RAC breakdown card in an envelope to hand to the “courier”.

When the “courier” arrived, Shomrim apprehended him. Police later arrived and arrested him.

Shomrim chief executive Gary Ost said volunteers would be on hand to assist families who believe they have been targeted.

“We want to remind the community that banks will never ask anyone for their pin number over the phone.

If someone does receive such a phone call, they should ring our hotline or the police from a separate phone line,” he said. “The scammers stay on the landline to block you from calling police. People are being tricked out of thousands of pounds.”

Barnet Police said a 27-year-old man from north London was arrested on suspicion of fraud — and driving while disqualified — following the incident.

Superintendent Mark Strugnell said: “This case exemplifies how important is the co-operation of the community to tackle crime successfully”.
Thejc
Posted by joe levin at 8:28 AM